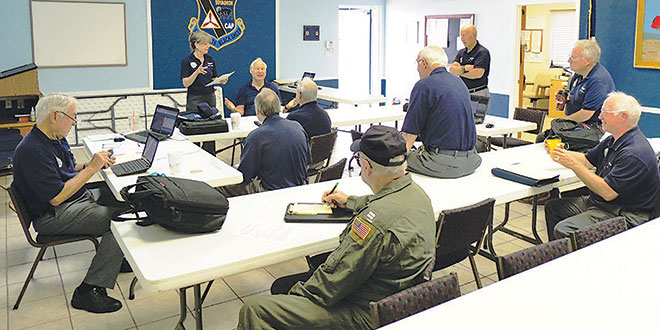 Civil Air Patrol squadrons combined their experienced personnel and equipment assets to conduct this large three-day event. Having aircrew and administrative staff from both Squadrons flying and working together helped hone their skills in searching for downed aircraft, lost boaters and kayakers, as well as spotting anything unusual in the areas between Marco Island and the Big Cypress National Preserve in the Everglades.

The activities started with flight crews attending a safety briefing conducted by the Squadron’s Mission Safety Officer, and then a Mission Briefing by the Squadron Commander Capt. Bob Corriveau and Incident Commander Lt Col Lee Henderson followed by flight assignments to a specific area of the Big Cypress. Each of 10 aircrews consisted of a Pilot, an Observer and a Scanner who have either completed training for their specific specialty or were fulfilling their training requirements. The aircraft, Marco Squadron’s Cessna 182Q, and the crews were dispatched to the search areas in 2 hour intervals.

Working from aviation charts, aerial photos, and last known theoretical position reports, the air crews were dispatched to the four corners of an area

stretching from Marco to the Everglades National Park. Our mission base and Communications headquarters, working with the aircrews, require the co-ordination of the Administrative staff, Planning staff, Communications operators, and Aircrews to ensure a safe but effective training exercise. The aircrew’s mission was to identify their locations, take photographs, and report latitude and longitude data to the Mission Base Communications Center.

Exercises like this one are held at least four times per year and local Civil Air Patrol crews assist each other in Southwest Florida during their SAREX’s to keep the Southwest Florida crews sharp and the community safer!

The Marco Civil Air Patrol squadron has an agreement with the county for search-and-rescue operations according to the methods shown above. Also, they perform regular patrol missions during the late-daylight hours for boaters in trouble and others who become lost in the backwaters. Some funding comes from the county, but much comes from the generous residents and businesses of Marco during the annual mail requests from the squadron.

The squadron commander, Capt. Robert Corriveau, thanks the community for their support of this valuable resource. Remember, we are all volunteers, and funds go to actual operations only.