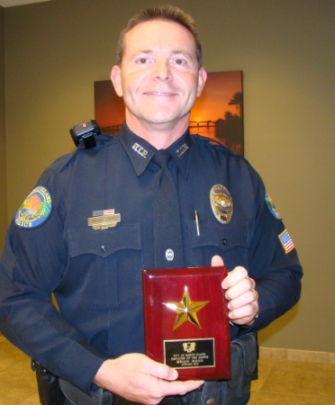 On Monday, January 4, 2010 the City Council of Marco Island started the new year with two meetings: first they met in closed attorney-client session with City Manager Steve Thompson and City Attorney Alan Gabriel to discuss matters relating to pending litigation with Key Marco Community Association, Inc. v. City of Marco Island. At the conclusion of litigation,a transcript will become part of the public record. This litigation involves a case in which the City claims protected species of trees were removed from properties in Key Marco.

During the Community Forum, resident Dave Gardner requested that the City assist the committee looking for grants for Veteran’s Park, by allowing and expenditure of $39,000 so that engineering plans can be made. The committee would then have something tangible to present as part of a package when seeking grants. City Council agreed to put this on the next agenda.

Presentations: Officer of the Month

Officer Brian Hood, an original member of the Marco Island Police Department and  a twenty-three year law enforcement veteran was recognized as Employee of the Month. He began his law enforcement career with the National Security Agency in Washington, DC, and transferred to the Anne Arundel County Police Department in Maryland where he attained the rank of Police Officer First Class.

Officer Hood was the Marco Island Police Department’s first evidence and property officer, a duty he carried out while working as a patrol officer. In 2009, Brian became a State of Florida Derelict Vessel Investigator, and Crisis Intervention Team Member. He is currently assigned to the Marine Unit and patrols Marco Island’s waterways.

In the last eleven years with the City of Marco Island, Brian has earned thirty civilian and governmental letters of appreciation or commendation, has twice been made the Marco Police Foundation Officer of the Month, and has received the following Marco Island Police Department Awards: Lifesaving, Meritorious service, Community recognition (three times), Operational excellence (twice), Safe vehicle operator (twice), and Safe vessel operator.

According to his peers, “Brian is the textbook example of the quiet, consummate, professional police officer, who looks out for his fellow officers and the community with unwavering determination on a daily basis.”

The Jolley Bridge construction project has been accelerated with the availability of federal stimulus funds under the Florida Department of Transportation (FDOT). Construction plans could begin with permitting as soon as mid-January.  The original bridge design has been relatively stable over the past four years, but a number of different options have been considered as the Metropolitan Planning Organization (MPO) reviewed bridge design, toll, and other larger decisions. With only half of the funds needed for a totally new bridge available, the newer design allows the addition of a single span, instead of replacement of the present span with two new spans. This change dictates relatively minor design issues that will impact the aesthetics of the project. Since the bridge is a major and long-lasting capital asset, the work over the next two years will have long-term impacts on this community.

Although the design does not include a fishing pier, it could possibly be added at a later date. Any cost savings will be realized in additional landscaping. There is a pedestrian walk with look-out areas along the span.
The public is invited to attend a pre-construction information meeting
4:30 — 6:30 p.m. on Wednesday, January 13, 2010 at the United Church of Marco Island 320 N. Barfield Drive.

Second Reading and Public Hearing of an Ordinance to create a Utilities Advisory Board.  Don Henderson, who spoke on behalf of the committee that recommended this formation of this Board, pointed out how they had tried to make it as efficient and responsible as possible since it would be in charge of the largest expenditure in the City budget that affects all residents  He said that only two of the current members would consider going on the Board, that it would be a tough committee to assemble, would require as 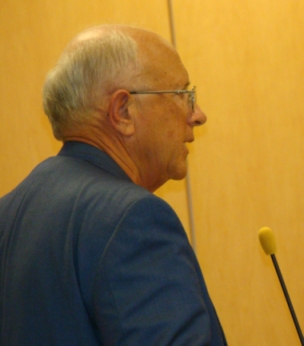 much support as possible from Council, and would require not 40 but more likely 100 hours of work to get things “fair and equitable” and to “streamline the process”.  Council’s recommendation to change the Ordinance to read seven members, was defeated. The second reading of the ordinance providing for the creation of a new standing committee to be known as the “Utilities Advisory Board,” and to transfer funds as outlined and as necessary for FY10 from the City Council contingency fund was passed.

Under Future Agenda Councilman Forcht suggested the discussion of the Ordinance once more.

Public Works Director Rony Joel pointed out the need for emergency repairs to the Hernando Bridge, noting that the seawall is decomposing and it is too late just to add a patch. Councilman Kiester added that there was a difference between “It would be nice to have” Mackle Park improvements and the “Must have” of this bridge project. Council voted unanimously to authorize the City Manager to proceed with the repair of the Hernando Bridge and utilize funds from unspent bridge repair funds.

Council moved to approve the Award of contract to Douglas N. Higgins, Inc. for the construction of Mackle Park Phase 3A improvements for a not-to-exceed amount of $240,100, by a vote of 4 – 2 (Forcht and Kiester voting against the motion). The FY 2010 CIP budget includes $250,000 for Mackle Park Phase 3 improvements, and assumes a matching grant from the Florida Recreation Development Assistance Program (FRDAP) of $200,000. The matching grant stipulates that all improvements must be completed by April 30, 2010.

City Council has discussed possible naming opportunities of City facilities to recognize present and former residents who have given exceptional service to the City. Naming City Hall for former Councilman E. Glenn Tucker who passed away suddenly in 2009 was recommended by Pat Neale, Craig Woodward, and ‘Dusty’ (Donald)  Rhodes, Tucker’s longtime friends (and sometime legal adversaries). It was clear from some of the public comment that not everyone agreed: some felt a contest for naming should be held or that a building should not be named for a particular person. Chairman Popoff’s opinion that although he often did not agree with Tucker on Council, he felt his years of service to the City should be recognized,  was obviously shared by those who voted unanimously in favor of the recommendation to create rules for naming facilities, and by most of the audience as well.

The City has received notice from the Florida Department of Transportation (FDOT) that grant funds are available for the construction of a shared use path from San Marco Road to Mackle Park. For City Council consideration, this is authorization for the City Manager to accept $210,000 in grant funding.

The motion to authorize the City Manager to execute the grant agreement with FDOT for the Linear Park Trail project and transfer the required local match funding from the construction contingency/Spending Cap fund was defeated.

Appointment to Firefighters’ Board of Trustees

Tom Kirstein, CPA was appointed unanimously to the Board.

City Manager was authorized  to engage renewable consulting contracts for a period of three years, with Coastal Engineering Consultants, Humiston & Moore, Coastal Planning & Engineering and Taylor Engineering by a unanimous vote. There is no fiscal impact as services are engaged only as needed. Most of this work is done to renourish the shoreline such as the receding Hideaway Beach.

Some of the items that arose for future discussion were the need for hiring financial people with bonding experience so there would be less need for using a consultant; deferring the cessation of city employees taking home city vehicles (utility, fire, police) until further study; criteria for naming city facilities; naming of the new bridge.

Since Councilman Trotter who serves on the MPO assisted in getting grants for the Linear Trail Project,  Chairman Popoff recommended Council reconsider the proposal when Trotter is present.

City Manager Thompson reminded Council: they would be considering light fixture designs for the Marco Lake area; a new City newsletter; options for the naming of City Hall.