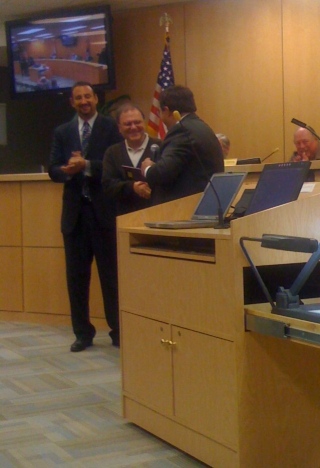 City Council honors employee of the month, Angelo Ubertaccio for 10 years of exemplary service to the Public Works Department.

At the last City Council meeting on February 1, Angelo Ubertaccio was recognized as an outstanding employee for 10 years of valuable service to the City’s Public Works Department.

Marco Island Firefighter Raymond Ladurini, about to be deployed to Iraq, was also recognized. The Coastal Breeze News will be undertaking to send parcels to Ray and his troop on an ongoing basis while he is in Iraq, and we invite those interested in participating to stay tuned for lists of appropriate items that may be dropped off in our offices in the Shops of Olde Marco.

Some agenda items that were addressed and approved follow:

• A change order for additional funding of $131,135 to Camp Dresser McKee (CDM) to oversee Phase 2 construction of the reclaimed water production facility, including some emergency design safety-related issues that will eventually encompass grease and grit removal facilities, a safety wall and repairs and maintenance to the equalization plant, according to Public Works Director Rony Joel.

• A contract for $445,060 with CDM for the design to complete Phase 4 construction for the Reclaimed Water Production Facility. This is needed and
was recommended by the Ad Hoc Utility Advisory Committee, to handle the
additional wastewater flow from the Kendall and Mackle Park Sewer districts.

• The lowest contract bid to Boran Craig Barber Engel Construction Co., Inc.
in the amount $105,777 to build a security wall and fence as required by the Department of Environmental Protection (DEP) at the North Water Treatment Plant.

• A contract based on lowest bid with G&G Industries in the amount $1,125,353 for the construction of the South Water Plant Site Piping Improvements, to include replacement of 16 inoperative or leaky water valves at the plant; converting the blend water and membrane concentrate lines allowing more North Plant Water to be sent to the South Plant; adding a larger diameter treated water main inside the plant that supplies water to the island to meet state mandated fire flow volume requirements; installing new tank interconnect/site piping, mixing point and flow meter assemblies; relocating pipes to facilitate the construction of a new finished water storage tank; demolition of obsolete piping.

• A contract for the professional design 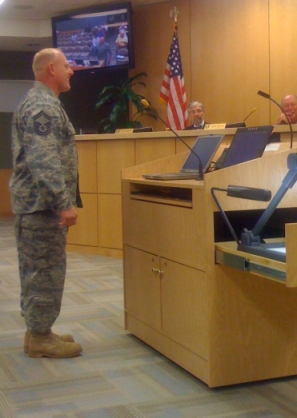 services of the NWTP UV disinfection
system and finished water transfer pumps to CH2MHill, Inc. to comply with the new FDEP regulations. The present treatment and disinfection at the North Water Treatment Plant does not meet these new state requirements. Ultraviolet (UV) disinfection is the most reliable and cost-effective method to meet the new, more stringent regulations. Installation of this system will reduce operating costs by $130,000 annually, according to Rony Joel, public works director.

• A contract with AECOM Engineering for design services for the Year 7 Estates Sewer District, not to exceed $597,000. The last district to be designed is the Estates Assessment Area which has significant elevation changes and offers specific design challenges. Joel commented that the expenses are predicated on the number of participants in this program.

• Guidelines to name City facilities to recognize present and former residents who have contributed their services to the City, were returned to Parks and Recreation Committee for more consideration.

• An agreement between Collier County and the City of Marco Island for
distribution of Community Development Block Grant funding in the amount of $75,000 for construction of sidewalks adjacent to 2nd Avenue in Marco Highlands Subdivision.

Council considered the format of the March 15 budget meeting with regard to swearing in the new members of City Council before budget discussions, in order that they might participate.

During Council Communications, the following were mentioned: training for
advisory board members by the League of Florida Cities; actions of Charter
Review Committee following the Referendum results (will there be investigations?); kudos to the Police Department for the decline in crime on
Marco Island; thanks to Councilman Ted Forcht for his years of dedicated
service, and congratulations to re-elected Councilman Kiester, and Councilmen-elect Batte and Magel; Councilman Recker said he had “extended the olive branch” to the Conservancy and exchanged communications with them; Councilman Forcht’s position on the CAC will be replaced; staff is preparing a report based on comments by Joey Oliverio at the last meeting, regarding impact fees.

The next regular City Council meeting will be: Tuesday, February 16 at 5:30 P.M.