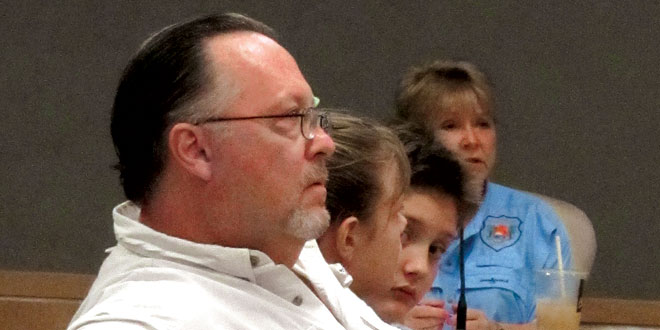 It has been a while, but Mike and Michele Sullivan have a few things to cheer about this month. Their son, Ryan, was just cast in the lead role of “Ralphie” in The Marco Players Theater upcoming production of “A Christmas Story.” Michele is home and healing after another bout of septic shock landed her in the Intensive Care Unit in August. The federal government finally, after a three-year fight, approved Michele’s Medicaid benefits to help the family with its mountain of medical bills and her upcoming treatments for Multiple Sclerosis.

The Sullivans also received some help from members of the city staff of Marco Island. Thanks to a collective effort by Community Affairs Director Bryan Milk, Planning and Zoning Technician Lina Upham, Code Compliance Supervisor Liz Carr and Marco Island Utilities Customer Service Manager Jim Lang, an agreement was reached with the Sullivans to finally disconnect the septic tank at their home on South Heathwood Drive and hook into the city’s sewer system.

The two-year agreement allows the Sullivans to pay for the connection — a slightly discounted rate of $1,500.00 — as part of their monthly water bill and at an interest rate of eight percent. Fort Myers-based Rohaley & Sons Plumbing will do the work.

“Bryan (Milk) called me up and said the city wanted to try to work something out (with us),” explains Mike. “I have to admit how nice they are down there. (The city staff) went out of their way. They are the heroes in this.”

Until now, the Sullivans simply could not afford to pay for the sewer connection. While Michele battled countless severe medical problems, including her MS, Mike supported the family physically, psychologically, emotionally and financially. The result is a one-income household with a barebones budget. What little money they had — $6,500.00 — was spent to wage a legal fight for Michele’s Social Security Disability Benefits. Although the Sullivans were victorious in June, they continue to wait on the three-year retroactive payment.

Enter Marco Island’s city staff, whose action was prompted by a Code Enforcement Board decision made on August 13. Although the city’s Code Compliance Services worked with the Sullivans for three years on the sewer issue, this was the first time their case came 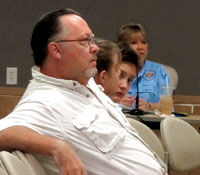 Mike Sullivan and his children at the September 10 Code Board Meeting. PHOTO BY CAROL GLASSMAN

before the board. Even so, the board ordered the Sullivans to connect to the city sewer within 31 days of August 15. The board assessed a $250.00 administrative fee, and if the Sullivans failed to comply by the 31st day, they would be fined $250.00 per day until they were compliant.

Unfortunately, the Sullivans were unable to speak to the board members, as they were at the University of Miami Multiple Sclerosis Clinic for an appointment with Michele’s MS specialist. While at her appointment, her condition turned critical, so critical she could not begin the treatments for her MS. In fact, doctors diagnosed her with her second case of septic shock this year, which was accompanied by renal failure. Michele was immediately admitted to the Intensive Care Unit of the hospital.

Milk admits the Sullivans’ case is an unusual one, and that is why the staff felt compelled to help the family. “It is a situation where we found a hardship,” Milk notes. “We found it to be a humanitarian effort to find a solution in a financially affordable manner.”

To make the agreement happen, the city reached out to Rohaley & Sons, a company it worked with in 2007 to help Marco Island residents connect to the sewer system. Back then, the cost for the city-contracted service was about $1,670.00, including permit fees, and residents paid for the hook-up through their monthly utility bill.

The signing of the agreement came just a day before the Sullivans were scheduled to appear before the Code Enforcement Board during its September meeting. This time, Mike and his children, Ryan and Cassie, were on hand, and the board voted unanimously to rescind its previous order.

In the end, the Sullivans are very grateful to the city staff and the Code Enforcement Board for their actions. Still, Mike cautions the board on making snap judgments in future hearings. “I thank (the board) for (rescinding the order), but it seems they make decisions without being fully informed,” he says.

“(The board) needs to listen to the code enforcement officers,” adds Mike. “They come in contact with the people everyday… They showed some compassion. I feel really good about the city employees. If they are any indication of how the city is being run, then things have really changed.”