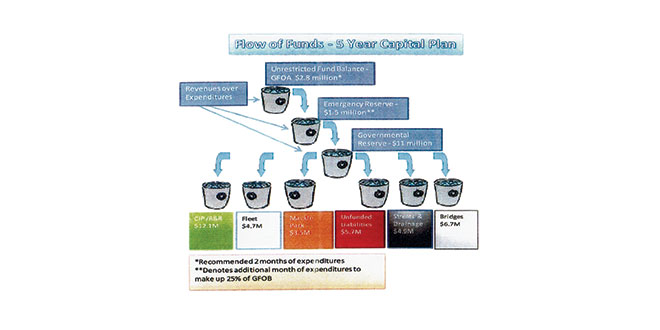 Hernstadt seemed determined to make the city’s budget and longterm debt presentation both simple and entertaining as he introduced himself and encouraged the audience to take his business card and never hesitate to contact him with questions or concerns.

Briefly, Hernstadt pointed out that in order for the city to fund its projects on a cash basis rather than having to go deeper into debt every time it faced an expense, he had a plan to accumulate $5 million annually to meet general government long- and short-term capital needs. The capital improvement plan would set money aside and take the risk out of the future.

Referring to his first 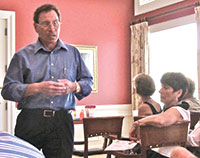 City Manager Roger Hernstadt addresses residents of Hideaway Beach on his plan to prevent the city from incurring further debt from loans. PHOTOS BY CAROL GLASSMAN

handout entitled “Flow of Funds – 5 Year Capital Plan,” Hernstadt made a case for increasing the cost to live in a $500,000 taxable value homesteaded house by $60 per annum, or approximately $5 per month, by a “Guess the Grocery Cost” game. Residents quickly realized that a monthly sacrifice of a large bag of Tostitos Scoops, a bag of Oreo cookies, a box of Dunkin Donuts Munchkins, a box of Kellogg’s K, a Starbuck’s Latte or a GulfShore Magazine would be a small item to give up in order that the city expenditures be met without having to borrow further funds. He assured everyone that this would include all the funds needed for bridges ($6.7 million), streets and drainage ($4.9 million), unfunded liabilities ($5.7 million), Mackle Park ($3.5 million), fleet ($4.7 million) and CIP/R&R ($12.1 million). 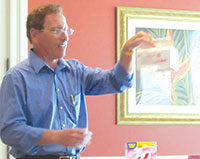 Holding up a box of Munchkins, City Manager Roger Hernstadt illustrates the difference that giving up a monthly $5 treat can make on the city’s budget and longterm debt.

and body armor for policemen that would all be covered by the same increase.

Hernstadt warned his listeners that members of the press might translate his message into a “10 percent sexy hike” in taxes, but in essence, the only people he might make unhappy with this plan would be the city’s money lenders and bond agents. He went on to say that if the city couldn’t crack “this small nut” of funding, how would anyone have the confidence that they could then approach the larger “nut” presented by existing utility expense problems.

When questioned on the future of Mackle Park and why the decision about it had been put to referendum, Hernstadt stated that anyone who thinks renovation of an old building would be less expensive is mistaken and that a total rebuild is needed.

Although few homes within Hideaway’s gated community fall within the $500,000 range, Hernstadt’s presentation seemed to make sense to most of those present, some of whom congratulated him for his efforts.