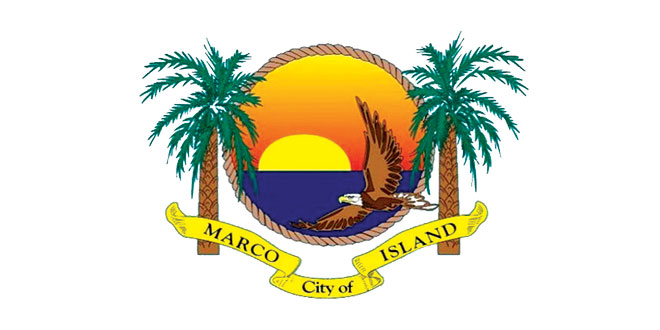 The Marco Island City Council held its regular meeting on April 4. Chairman Brown was present, as well as Councilors Batte, Honecker, Honig, Petricca, Rios, and Sacher. Councilor Sacher was supported by his colleagues when he asked to move the action items up on the agenda since he could not be certain that he would be present for the entire meeting as he was recovering from surgery.

A resolution was passed authorizing a “piggyback contract” for the city to enter into an agreement and accept the bid from Preferred Materials, Inc. for the annual street and roadway resurfacing contract in an amount not to exceed $537,770. An amendment had been proposed to the resolution to add repairs to Hernando Drive in the amount of $10,770. This amendment did not pass as a few councilors noted that many roads were in a similar condition as Hernando Drive, which had been resurfaced in the Septic Tank Replacement Program (STRP) and was not scheduled for resurfacing for five more years.

A resolution was approved in a 4 to 3 vote, authorizing the payment to Ocean Habitats, Inc. of an amount not to exceed $10,000 for the installation of Aquatic Habitats, a living habitat system to improve the water quality of some pilot test canals. Known as Ocean Restoration Initiative (ORI), up to 100 living dock habitats will be placed in an average sized canal on Marco Island. According to ORI, the devices will be monitored for the next three years. According to ORI, within 90 days of their installation the habitats will become covered in filter-feeding animals that will begin cleaning the surrounding seawater. However, the council added in a requirement for pre- and post water quality testing to measure if the system is as effective as promised.

A resolution was passed approving an additional $143,000 of permit fee revenues for the Building Services Department’s 2016 budget.

A resolution was presented to direct the city manager to ensure restaurant compliance with the fire code and zoning and building regulations regarding parking, restroom facilities, installation and maintenance of grease trap/interceptors, and payment of the required utility impact fees. Several councilors saw no need for the resolution, seeing it as a resolution to simply direct the city manager to do what is essentially his job. However, City Manager Hernstadt said that the regulations have been neglected for many years and in the past, not enforced. The resolution would demonstrate that the city council, after many years of a laissez-faire attitude towards code enforcement, now wanted the city manager to initiate a process to enforce the city’s regulations.

Councilor Honig suggested “starting with the basics” in enforcement – zoning certificates, number of seats, and parking spaces. He suggested that the city manager collect information from the businesses, which would then urge voluntary compliance among the businesses. Councilor Petricca cited that in the past, voluntary compliance has been unsuccessful. He went on to say that the enforcement of these regulations should apply to all businesses, not just the restaurants. Bald Eagle Drive resident, Howard Reed spoke from the audience stating that the parking problems seem to be the core issue. He suggested the council amend the wording of the proposed resolution. He added that the resolution appears to be a reaction to the fact that the code has not been enforced in the past. The resolution as presented did not pass. Councilor Honig made a motion, seconded by Councilor Batte, to direct the city manager to request information from the businesses on Marco Island regarding zoning certificates, seating and parking, and make that information available to the city council in June. This motion passed unanimously.

For the agenda, videos, and other information on the Marco Island City Council, please visit www.cityofmarcoisland.com.