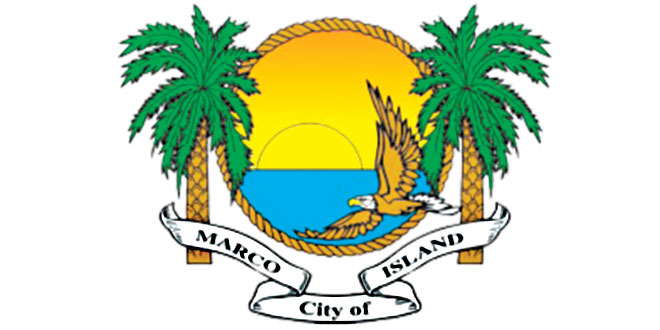 Since April, Marco Island City Manager Roger Hernstadt has been pounding the pavement to get the word out in the community about his FY2015 budget plan for the city.

Call it what you will — the bucket system, pay-as-you-go, debt free program — the five-year plan promises to streamline Marco Island’s general fund finances and get the city out of debt while also planning which projects it will tackle, when it will tackle them and then saving for them.

What debt you ask? Well, there is the $150 million in water and sewer debt, the $18 million in debt on the city’s general operations side — which includes $1.3 million in interest on the bank loan for the Smokehouse Bay Bridge project — and the $5.5 million in unfunded pension liabilities, and don’t forget the list of 116 items totaling $31.9 million in major capital improvement, infrastructure projects and equipment replacements the city is facing over the next five years.

The crux of the budget plan: A 7.85 percent millage rate increase over the city’s aggregate ad valorem taxes based on the city’s rollback rate and a conservatively projected  increase in Marco Island property values. With a millage of 2.0466 for general operations and .1041 for debt service, the proposed overall millage for Marco Island property owners for FY2015 is 2.507.

Essentially, this would amount to an extra $60 in annual property taxes for a home valued at $500,000 every year (so future taxpayers will also be contributing). That is just an extra $5 per month and still keeps the total annual municipal tax bill under $1,000 per year or $85 per month.

The lone dissenter: Councilor Amadeo Petricca. Instead of supporting the millage, Petricca pitted current taxpayers against future taxpayers, arguing it was unfair for current taxpayers to have to set aside money for projects for which they may not reap the benefits. He said he was not a fan of the pay-as-you-go philosophy behind Hernstadt’s budget plan, arguing that he did not like the idea of not using credit and that there was plenty available already in the asset replacement fund. He recommended lowering the millage increase by half, saying, “We are being too aggressive here.”

Petricca’s concerns were echoed by a six concerned citizens, including Victor Rios who is running for a City Council seat. He criticized Hernstadt’s plan: “It is easy to balance a budget by raising taxes. We need to do it with less money. I beg of you to look out for the citizens.”

In fact, Rios indicated that during a recent weekend canvass for his campaign the first question many residents asked him was if he was going to raise taxes. “It was eye opening,” he told City Council.

Still, some councilors — Chairman Ken Honecker and Vice Chairman Larry Sacher — were dubious of the negative response. Sacher said, “The city manager has been out in front of the city for three months now with this, and I have not seen on single objection. Everyone has received their TRIM notice. This will be the first time the city has had long-term planning for deficit reduction…the first time for legitimate long-term planning.”

Hernstadt was even more concerned and surprised by Petricca’s stance and Rios’ statements. “We have a number of roads and assets that are reaching the end of their life cycles. It is a political cry of wolf to say no more taxes just to convince people to go against setting aside the extra $60 a year so we can accumulate the money in the budget to meet these known, oncoming obligations,” explained Hernstadt in an interview after the council meeting. “If the City had plenty of cash lying around why would we borrow $6 million at a cost of $490,000 a year for 15 years and incur $1.3 million in interest for the Smokehouse Bay bridge replacement,” he asked.

“Of course,” he continued, “we can always whip out the credit card again when a project comes up, and then the citizens will wind up paying the $60 extra each year plus interest. When you borrow money, you are subject to the global economy — entire world’s interest rates. These obligations are not going to go away for the city, and it becomes a question of if the citizens want the city to live on a credit card scenario where we perpetually  make payments with interest  or can we anticipate the need  and set aside money so when the item comes due we can have the money to pay for it like any well managed condominium.”

For Hernstadt, it is not a question of IF citizens want their taxes raised, as Rios suggested, it is a question of when. “If you ask citizens if they want taxes raised, 100 out of 100 will say no,” he said. “The legitimate question is do you want to pay $60 a year or pay $60 a year plus interest. If you look the list of city obligations, the only question is HOW are you going to pay for them not IF you are going to. My 35 years of public administration experience has shown the more procrastination — the more expensive it will inevitably be for the taxpayers.”

Hernstadt conceded that City Council could always go in and chip away at the proposed budget as it has done in year’s past. Councilors could eliminate the $21,000 line item for a magistrate, the $50,000 for the land development code review, or recently approved lobbyist funding. They also could try to do away with the across the board 1 percent employee wage increase or find creative ways to get around the increases to the city’s group insurance plan, despite the fact that the employees are paying more as well.

He warns against this budgetary plan of attack, though, using last year’s $100,000 cut from the city’s maintenance budget as a caveat and lesson learned. “We cut $100,000 out of the maintenance budget in FY2014, and I believe it showed,” Hernstadt noted, “It shows on our major corridors, buildings and equipment. The roads, for example, clearly need attention. It is one thing to have cracks in the road. It is another thing entirely to have grass growing through the cracks in the road….Don’t expect to cut the money to have your grass cut 22 times a year and then expect the grass to still be cut 22 times.” However that does not mean that the list of 116 items and each item’s respective cost should not be scrutinized.

Still, Hernstadt added, he would not ignore a legitimate, fiscally-responsible alternative budget plan if someone offered it, although no one has to date —

“If someone  has a better plan, let’s hear what it is,” Hernstadt said, “but to just get up there during a council meeting to make political statements without a solution is problematic.”