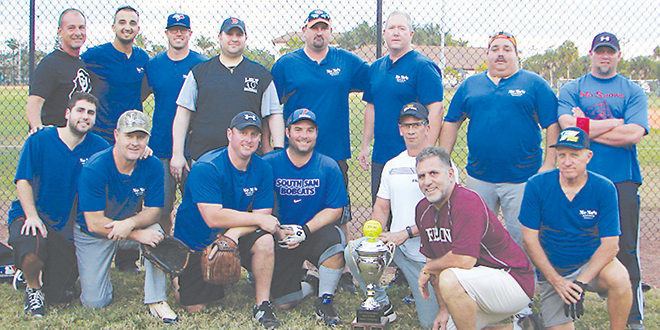 The City’s adult softball league wound up its regular season with Island Pizza/ NeNe Kitchen claiming its third consecutive regular season championship. Island Pizza final record was 12 wins & 2 losses. Joey’s pizza came in 2nd, followed by Reiman Construction in the Third spot and Cocomo’s grill in fourth. Nacho Mama’s, Kretch’s and O’Donoghues rounded out this year’s teams. The City would like to thank all of the sponsors of this year’s Adult softball League. In the season ending tournament semifinal games held March 12th. Joey’s Pizza squared off against Reiman Construction in the first game. The game saw Joey’s jump out to a 4 -0 lead in the first with Riemann’s only being able to notch 2 in the 2nd inning. The third & fourth inning saw good defense by both teams. The fifth inning saw Reiman’s notch 6 runs to take the lead 11 to 5. Joey’s was able to rally adding 4 in the bottom of the 6th but heading into the final inning was still down by two. Facing elimination Joey’s Tony Olivero came up big with a double with two men on to tie the score and force

Santo Gentile -Joeys with a hit

extra innings. The eighth inning was once again saw good defensive work as both teams were held scoreless. The TexasTie Breaker ninth saw Reiman add two runs in the top half but once again Joey’s came back with three runs to win the game and advance the Championship game. The second game of the night saw regular season champs Island Pizza square off against Cocomo’s Grill. Cocomo’s gave Island Pizza all it could handle in a game many thought would be a lopsided victory for the Pizza crew. Island Pizza behind its big hitters jumped out to a 12 to 5 lead after 3 innings and looked like they were going to run away with the game but Cocomo’s with a big 6 run inning in the 5th tied the score at 13 to 13. Island Pizza added 4 run in the bottom half of the inning to move ahead 17 to 13. A scoreless 6th inning saw Cocomo’s facing elimination but once again the “Grill” rallied in the 7th adding two, but fell just a bit short and the game ended 17 to 15, with Island Pizza advancing to face Joey’s Pizza in the Championships.