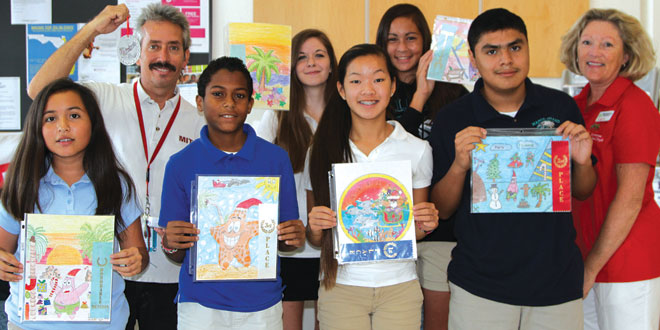 Members of the Christmas Island Style committee have been working away behind the scenes to ensure everyone on Marco Island has an outstanding holiday season.

For the past six years, Christmas Island Style has chosen art designed by a student attending Marco Island Charter Middle School to be the new Island Style ornament for the following year. Students in sixth, seventh and eighth grades had a chance to submit an original piece of art, which included a starfish theme, to art teacher, Mr. Shane Totten, for the 2014 ornament.

Ornament committee co-chairs, Bette McGilvary and Barb Dasti put together a group of judges who met at the Marco Island Center for the Arts to go over the submissions. Judges included Jack Patterson, Commissioner Donna Fiala, Dianna Dohm of Mutual of Omaha Bank, Assistant Police Chief Dave Baer, Dr. Mike Early of the Marco Island Center for the Arts and Patricia Rutledge from the Marco Island Historical Society. A total of 64 entries made it a difficult choice, but when the votes were tallied, the first place ribbon went to Maddie Hopkins.

The 2014 Christmas Island Style ornament will feature her design of Santa and his sleigh being pulled by dolphins. Maddie also recently won a statewide writing contest, part of Hispanic Heritage month, which was covered in the November 1st edition of Coastal Breeze News.

Judges also chose Cipriano Martinez’s design as the second place winner and Tyron Marty Hurtado’s as the third place winner. Honorable mentions went to Samantha Gutierrez, Abi Meredith and Keilin Stefan. “It is just coincidence that all the winners are seventh grade students,” said Shane. “This is the first year we have opened the contest up to the entire school, and it looks like we have a creative seventh grade!” Shane, along with the winners, will be recognized at this year’s Christmas Island Style Tree Lighting Ceremony on November 30 at Veteran’s Community Park at 6 PM.

The 2013 ornament is available for sale at locations throughout the island including the Chamber of Commerce office on Collier Boulevard, Salon and Spa Botanica and Keep in Touch – both located at the Shops of Marco, and the Marco Island Center for the Arts gift shop on Winterberry and Marco Island Florist on South Barfield.