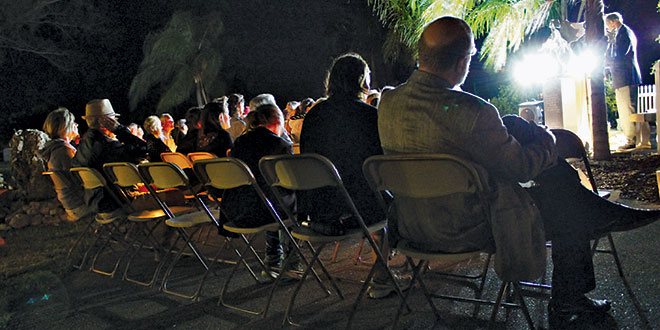 It was a cool, windy night. Family and friends gathered together, illuminated by the faint glow of the candlelight, at the Marco Island Cemetery. Every December 6th for the past 16 years, the cemetery has hosted the Christmas Box Angel Memorial Service in order to mourn and to remember the lives of children that have been lost too soon.

The origin of the service stems from a book written by Richard Paul Evans. His book titled, “The Christmas Box” follows a mourning mother who has lost her child. She finds a sort of peace or solace in a statue of an angel, whose palms are upturned. The statue from the story has a place in the Marco Island Cemetery.

“The first angel monument was dedicated in Salt Lake City, Utah in December 6th, 1994. Which is the month and the day that the 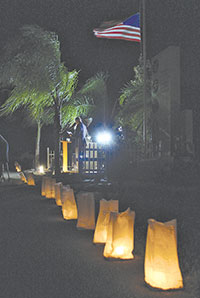 The Marco Island Cemetery has been hosting the Christmas Box Angel Memorial Service for thepast 16 years.

child in The Christmas Box died,” said Ed Beck in his opening remarks. “Since that time, additional monuments have been placed across the country. On December 6th of each year, a ceremony is held at this monument and all the monuments across the country to honor and remember our little angels.”

Roger Moll was then asked to the stage to share a few words. He started with a bible verse, “And laying his hands on him he said, “Brother Saul, the Lord Jesus who appeared to you on the road by which you came has sent me so that you may regain your sight and be filled with the Holy Spirit.” Acts 9:17.

Roger lost a daughter, Kendall. He shared his memories of her with the audience and his hardships in dealing with her passing. In 2005, Kendall would have turned 18 years old. 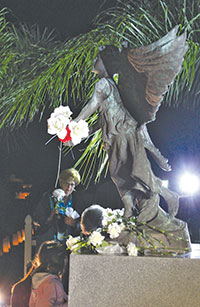 Each year, those in attendance lay flowers on top of the Christmas Box Angel. PHOTOS BY SAMANTHA HUSTED

birthday and even just regular days, memories flood back to the days that I had with Kendall,” said Roger.

Each year the event’s organizer, Sandy Boy makes a souvenir for those in attendance to take home. This year she made angel Christmas tree ornaments. Sandy has also lost a child. To her this event is important in that it brings people together. Losing a child is not something that everyone can relate to. The Christmas Box Angel Memorial Service allows people to share in their grief.

Finally, Ed took to the stage for the last time of the evening and read aloud the names of the children whose lives have been lost. As the names were read, each person, one by one, lit their candle—a symbolic reminder that they are not alone in their struggle. Then, the audience was invited to place their white flower onto the angel statue.