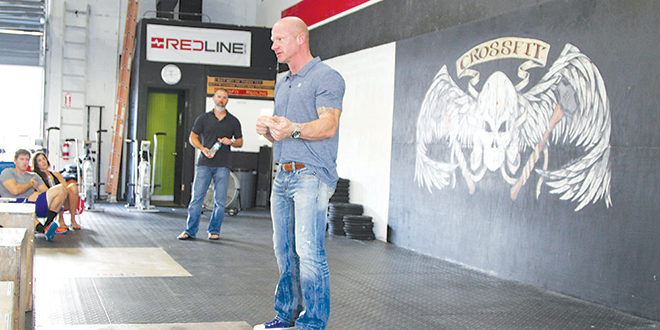 How many times have you walked into a store while looking at your cellphone or your wallet, “Excuse me,” you exclaim as you narrowly avert bumping into someone at the door? On an actual television news report recently, a woman stated, “I was driving and drove right into the active scene with the police.” Evidently she didn’t notice gnkghhekcnrnkeggkengk cnngktnkickicc “Unless you’re paying attention, you don’t know what you’re walking into, could be an armed robbery and now YOUR a target,” according to Chris Costa, of Costa Ludus, a weapons and tactical training speekcnkEtkrmgcEtgnkgk Naples, Florida on Situational Awareness.
CigckgegggthEt Redline’s members were fathers, mothers, kgrgrngcrngtgght police and military personnel. Et gnkg k owned by Anthony and Alison DiSarro. The DiSarro’s have thirty years in law enforcement between them so bringing Chris in for the semictccctcng DiSarro’s started the tetikcples which they quickly grew before moving to a larger location. Anthony kcetnrkeegtkg ece g g presentations personally on nutrition, but kkgt time we have brought in an outside speaker like Chris.” It was obviously a hit with the audience who lined the gym to listen to Chris. Chris’ resume alone demands respect. He was president of Magpul Dynamics after he spent 7 years in the private sector at Applied Marine Technologies on assignment with the U.S. Department of Homeland Security’s Risk Management Division (RMD). Chris 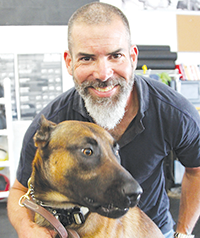 Chris with one of his highly trained secret weapons.

specialized in teaching Police Tactical Assault Operations for both Maritime and Critical Infrastructure take-back. Chris also provided Red Team Vulnerability
Assessments on critical infrastructures for the US Government. That was after Chris spent 12 years with the United States Coast
Guard, conducting counter-drug operations and special missions in Europe, the Middle East, and South America. His company, Costa Ludus, offers tactical training among other things, including team training for Critical Infrastructure assault, Maritime Assault operations and Hyper Violent Weapons manipulation. The primary focus of the presentation was to be aware of your surroundings, put the phone down; observe people and situations ahead of you. Take steps to insure your safety and the safety of those in your care. Simple things like backing up into your garage instead of straight in, watch
ing the garage door close completely before opening the house door and locking the house door behind you, all preventive mea
sures. Discussion about weapons followed, the universal rule of ‘protect your children tckegcgtggectt a concealed weapon if you have children in your care. Chris brought his Australian Shepherd, a highly trained and specialized member of his team, one that travels with him to seminars, training sessions and conferences everywhere. After a two hour presentation, the discussion was far from over.

Crossfit Redline is at 4227 Enterprise in Naples, www.crossfitredline.com. Anthony and Alison can be reached at 239-207-2533. You can find Chris Costa at costaludus.com.