Cheers for Champs Has MIA Looking Ahead 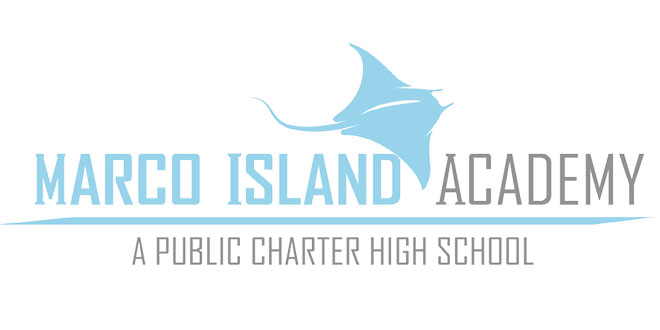 While just the basketball team has won a district title, the school held its first Cheers for Champions dinner on May 28. The dinner was about supporting all sports.

The school does not receive Collier County Schools support for the sports program. Each year more than $80,000 is needed, Watt said.

Each sports team has its own way of raising funds, but it falls short of paying for major items like

“Bruce Kretschmer came up with the idea of the dinner,” Watt said. He is the area cross country coach of the year and chef at Kretch’s.

“At that time I had no idea the important role he would play,” she said. “Athletics is far more than an extracurricular activity. Students not 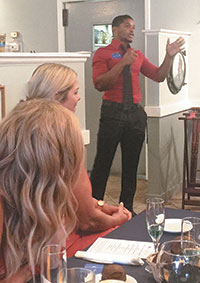 MIA’s Patrick Michel gave a humorous and poignant talk at the Cheers for Champions dinner on May 28.

only learn through teamwork and competition, athletics fosters personal growth, discipline, commitment and self-confidence. Often coaches and teammates serve as a second family.”

“He has served in many capacities, including mentor, role model and most importantly, a friend.”

Over the years the foundation has supported MIA through scholarships and its technology classroom, through the Squire’s Annual Golf Tournament.

“To show our appreciation the MIA board of directors voted unanimously to name the golf team in Gene Sarazen’s honor,” Watt said.

Team members will wear “The Squire” on their shirts and caps. 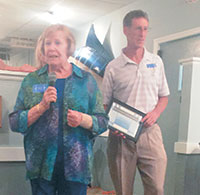 Scholar-Athlete nominee, gave a humorous talk, while stressing the importance of school athletics and what it did for him.

Displayed for the first time was the new school emblems, for sports and general school use.

Watt said funds are still needed for volleyball and boys soccer uniforms and a team tent for various sports. A donation of $2,000 for team uniforms, $1,000 for home and away uniforms and $100 for individual uniforms and $800 for the tent is sought.