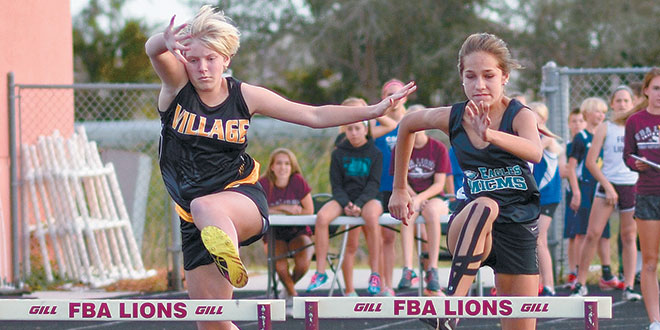 Village School’s Ashby Beckner has a half-step lead in going over the hurdle, but MICMS’ Susan Linn took over in the last 20 yards to win.

The girls garnered 220 points in their victory. The Charter boys, without some key competitors, came in third, with Village School of Naples winning the title. All but relay results were reported.

For the girls they had star power in most every event.

Ryenn Hart took care of her specialties in the 800 and 1600 meter events where the girls swept the top four places. Following Hart in the 800 were Dayna Dorestin, Sarah Nemeth and Ellie Poling. In the 1600 Hart was followed by Jenna Palumbo, Poling and Dorestin.

In the 100 meter run sixth grader Lea Blanco raced to first, ahead of teammate Kelsey Cashin.  Blanco came back for second in the 200 meters.

The Charter Middle School has no track surfaces, running on grass or sidewalks 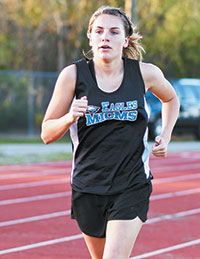 Ryenn Hart breezes to victory in the 800 meter race.

and practicing field events on grass.

Yet Susan Linn glided in the 100 meter hurdles, taking first place. Lauren Southerland and Katie Miller went 1-2 in the disc competition. Miller was second in the shot. In the high jump Abbie Graves was fourth, Victoria Pruitt fifth and Mikayla Bell, seventh for 11 team points. In the long jump Ellie Bell leaped to second place.

For the boys, Michael Mertens won the 1600 meter run. He was second in the 800 meters, followed by Kevin Barry.

Jonathan Watt cleared the hurdles for third place. The best finish for the boys in the shot was Sam Meredith’s fourth-place finish.

The Collier County Athletic (CCAC) season begins on April 2.  The CCAC Championships are April 30, beginning at 8 AM at Naples High School. Qualifiers will come from north and south county events on April 23. Marco Island Charter Middle School will compete at 8 AM at the Lely High School track.