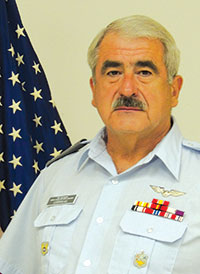 The change of command ceremony is a military tradition that represents great symbolism to this formal transfer of authority and responsibility for a unit from one commanding officer to another. The passing of the Colors from an outgoing commander to an incoming one ensures that the unit and its members are never without official leadership, a continuation of trust, and also signifies an allegiance of the members to their unit’s new commander.

The ceremony opened with the presentation of the Colors by the Civil Air Patrol Charlotte County Composite Squadron 6-Cadet Color Guard. The audience then recited the Pledge of Allegiance. The national anthem was sung solo by Nancy Damico followed by the Invocation by Colonel (Ret.) Frank Damico.

The following special guests were introduced: