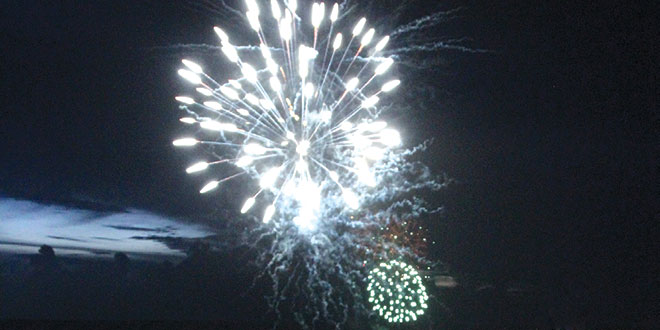 A bird’s eye view catches a glimplse of the crowd lighting up under the sparkles in the sky. PHOTO BY VAL SIMON

Want to know where to watch the “rockets red glare” and “bombs bursting in air” next Friday, July 4? Well, search no more. There are plenty of festivities planned throughout Southwest Florida communities to keep everyone busy all weekend, celebrating the United States’ birthday.

The Marco Island Civic Association will continue its Residents’ Beach tradition with Uncle Sam’s Sand Jam beginning at noon, Friday, July 4. There will be music, games and food throughout the day, culminating in the city of Marco Island’s annual fireworks display at 9 PM. While a Residents’ Beach identification card is required to gain entrance into the Sand Jam, the fireworks can be seen from just about every vantage point along Marco’s beach, including aboard a boat on the water. For more information about Uncle Sam’s Sand Jam, contact MICA at 239-642-7778. Questions about the fireworks display, call the city of Marco Island at 239-389-5000.

Don’t want to hang out at the beach? Then head to downtown Naples for that city’s Annual 4th of July Parade. Starting at 10 AM, the parade will wind its way up 3rd Street S., and then all the way along 5th Avenue S., finishing at 8th Street S. by Cambier Park.

The city of Naples hosts its own fireworks display as well from the Naples Municipal Pier. Beginning around 9 PM, the presentation will feature a 20-minute display musically choreographed to patriotic selections that will be simulcast on radio station WAVV 101.1 FM. Viewing spots will be available along the city beach from Lowdermilk Park to south of the Pier, and several Naples sightseeing boats offer cruises to watch the fireworks from the Gulf of Mexico. For more information, contact the city of Naples at 239-213-1000.

For those who are extra patriotic, travel to Everglades City this Saturday, July 28, to partake in the Everglades City Independence Day Celebration. Complete with a parade, kiddie contests, food and the Art-in-the Glades sale, the festivities begin at 10 AM and run through 3 PM. The opening ceremony begins at 10 AM, followed by the parade at 10:30. Arts and crafts booths open at 11 AM along with food and live music. The Little Miss and Mister Firecracker best-dressed kiddie contest are at 1 PM, and raffle winners will be drawn at 2 PM. The fireworks show blasts off at 9 PM. For more information, contact Dottie at 239-695-3781.

Adding to the evening’s enjoyment will be a presentation by Craig R. Woodward, the Island’s unofficial historian. Woodward moved to Marco Island in 1968 — 46 years ago — when he was 12 and lived in Old Marco during the development of the Island. Always interested Marco’s history, he participated in archeological digs and explored the Marco area as a child. Woodward was actively involved in raising funds to build the Marco Historical Museum and was involved in its design and construction. Now, he is involved in the design of the exhibits in the museum.

Also during the event, an original oil painting by local artist Inez Hudson will be offered in a raffle to raise funds for the Marco Island Historical Society. The painting — “Villa Sunrise” — was donated by Gail Fischer, who along with her late husband, Emil, donated the statute of the Key Marco Cat for use by the MIHM. Raffle tickets are available in the Museum Gift Store at $5 per ticket, $10 for five tickets and $20 for 15 tickets.

Historical Society members are admitted free of charge to the vintage movies event, and non-members are asked to pay $5. For more information, call the museum at 239-642-1440.

On Wednesday, July 2, the Collier County Sheriff’s Office will hold its Marco Island Summerfest event. Dubbed “Hot Summer Nights,” the event will be held at Mackle Park from 6-9 PM. This is the fifth year the CCSO has offered its popular summer youth activities program. It is open to students in middle and high school, and activities include water slides, music, dancing and games. Kids can snack on snow cones, popcorn and hot dogs served up by deputies.

The public also is invited to join the city of Naples Airport Authority in celebrating its 45th anniversary during an open house at Naples Municipal Airport, Friday, July 4, 1-3 PM. The Museum of Military Memorabilia will host special World War II displays; refreshments will be served; and mini-American flags will be given to those attending the celebration. The Commercial Airline Terminal is located at the south end of the airport off North Road. There is no charge for parking. For more information, call the airport at 239-643-0733.