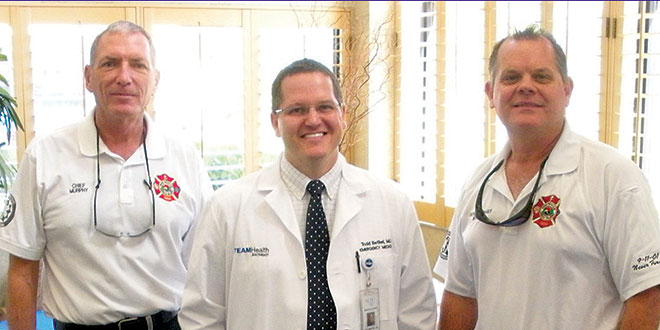 The Marco Island Urgent Care Center played a key role in Bill Harrison’s recovery after his heart bypass surgery in 1977.

“I came here for rehab,” said the spry 93-year-old. “They were great. I live on the south end of the island, so it’s really handy for me.”

He was among the many Marco residents who took part in the center’s 30th anniversary celebration, which was held Tuesday at the Heathwood Drive facility. The event featured testing for balance and pulmonary disease, blood pressure screenings, an ask-the-doctor booth, a tour of the campus, give-aways and light refreshments.

Marco Island Urgent Care Center is part of the Naples Community Hospital healthcare system. The facility offers treatment for all ages for acute medical problems, lacerations and other injuries, workers compensation cases, along with lab and x-ray and CT (CAT) scan services. The 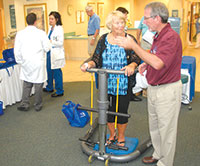 The turnout for the celebration, which ran 9 AM-12 PM, pleased Urgent Care Center officials.

“We’ve had a crowd,” said Kevin Fitzgerald, chairman of the facility’s Board of Trustees. “It’s been steady since 9 o-clock this morning. It’s been wonderful. I think we’ve had almost 500 visitors today to celebrate the 30th anniversary.”

“The pioneers of Marco Island did not necessarily want to go off the island for their healthcare and Naples Community Hospital recognized the need here and made a commitment to Marco Island.”

The ask-the-doctor booth was manned by Dr. Todd Bethel, medical director for NCH’s two urgent care centers (there’s also one at Vanderbilt Road and US 41) and its downtown emergency room.

Bethel said the questions he fielded primarily focused on the Urgent Care Center’s services and those of physicians located on Marco. Some people were interested in information about health conditions they are experiencing and

The visual representation of the Urgent Care Center’s history prepared by its staff of community volunteers.

referrals for where they could receive treatment, he added.

“I think people were excited,” he added. “They found some new information and that we offer more services here than they thought. I think they all had a good time.”

Roselyne Guy of NCH’s marketing department praised the contributions of the Urgent Care Center’s volunteer auxiliary, whose members are there daily to assist with its operations and also raise funds for the facility.

The Urgent Care Center’s CT scan was purchased through the auxiliary’s efforts and the group is working to buy an EKG machine this year, said its president, Gerry Guerra. A Pearl Jubilee Fashion Show fundraiser is set 11:30 AM, Feb. 24, at the Hideaway Beach Club. Tickets are $55 and include lunch, a silent auction, door prizes and hat raffles. For more information or to purchase tickets, call 239-393-4058.

Fitzgerald said the NCH system also includes an emergency room in North Naples and construction is imminent for a free-standing emergency room at Immokalee Road and S.R. 951.

“So NCH is growing with the population,” he added. “The board of trustees wants to be a representative 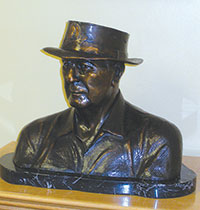 A bust of the late Gene Sarazen, the hall of fame golfer and Marco resident who was instrumental in the building of the facility’s Gene Sarazen Walk-In Center.

of the population. So they are in tune with what the people of Marco Island want and need.”

Marco Island Urgent Care Center is located at 40 Heathwood Drive, across Bald Eagle Drive from the City of Marco Island municipal complex. It is open daily, 8:00 AM-7:30 PM. For more information, call 239-394-8234.

Components of the celebration:

Testing for balance, blood pressure screening and pulmonary disease. “We’ve been serving the people of Marco Island for 30 years, 365 days a year and the folks who broke ground for Marco Island Urgent Care were visionaries and the Marco Island campus is an integral part of the entire NCH healthcare system.”

Bill Harrison: 93. Came today because “Some neighbors told me about it because they know my balance isn’t too good, so I thought I’d come and have it checked.” On having such a facility in the community: “I’ve been to this facility before and I like it very much. I had a (heart) bypass back in ’77 and I came here for rehab. They were great. I live on the south end of the island, so it’s really handy for me.”