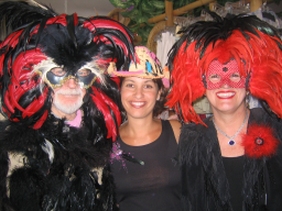 Celebrating the mullet might be a questionable activity to some, especially when it is uncertain what mullet is. In this case we are not talking about the haircut. No, we are talking about the fish most fishermen use as bait.

The 26th Annual mullet festival officially begins Friday, January 29 at 6 p.m. at Stan’s Idle Hour Restaurant in downtown Goodland. The kick-off party Friday at Stan’s Chickee Bar is a favorite of many locals. It is a time to wish Stan, family, and staff well and is filled with great anticipation for an amazing, fun-filled weekend. Jeff Hilt will perform Friday night until 10 p.m.  A few jokes by Stan and a demonstration on how to do the famous Buzzard Lope Dance are added highlights to the night.

On Saturday beginning at noon the pace picks up a bit and the mood becomes a little more active.  ‘Hot Damn’ will perform from  noon until 6:30.  At 3 p.m. the annual fish-cleaning contest will be held at the dock and at 4 p.m. the ‘Buzzard Lope Princess’ contest for girls ages from 6 to 16 will begin. 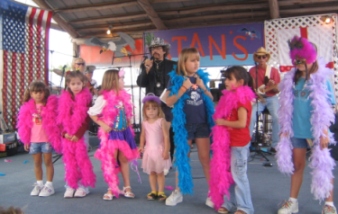 A past Mullet Princess contest. Photo by Jeane Brennan.

at noon the sounds of music by ‘The Buzzard Band’ start the action for thousands of mullet festival fans.  From the menu you can choose fried and smoked mullet dinners as well as hot dogs served by the Marco Island Fire Department.

The main event, the Buzzard Lope Queen Contest, begins at 4 p.m. and it is one of those things in life that has to be experienced.  Entry criteria are: 1) to be dressed as a buzzard which runs a full spectrum of imagination  2) to be able to dance the Buzzard Lope.  The Buzzard Lope dance is based on the song composed by Stan Gober, King Buzzard and goes like this:

Going down the highway feeling fine
Doing 55 and right on time
Look up ahead and saw something in the highway, looks dead
A bunch of buzzards standing around
They all step back, with a lot of hope
Start doing the Buzzard Lope . . . .
Flap your wings up and down
Take a few steps back
Go ’round and ’round

The question still asked by some is, “Why celebrate the Mullet?”

The mullet is a shallow water fish that lives in the mangroves.  In 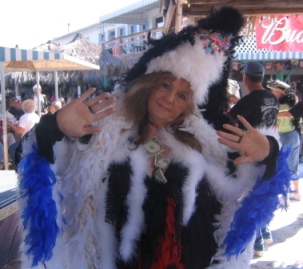 the fall, as the weather turns colder, the mullet start schooling and get ready to spawn.  The mullet fisherman travel from north to south following the winter’s cold front. By the time the mullet fishermen arrive in southwest Florida, it is usually December and the season usually lasts, depending on the weather, to the end of January.  Most mullet are caught for their red roe which is shipped to foreign countries. Red roe is the female egg and thought of as gold. In Goodland, however, there a a few residents who have discovered out-of-this-world recipes for smoked mullet and smoked mullet spread.

The story of the mullet takes us back 26 years when the mullet festival was just a twinkle in a fisherman’s eye. The story told is that after a successful mullet season, a group of fisherman got together to celebrate and thus, the Mullet Festival at Stan’s Idle Hour Restaurant was born.

In preparing for the weekend, be sure to bring the essentials: hat, sunscreen and even a jacket.  Call Stan’s at 387-2582 for information on parking shuttles from Marco or come early for the Goodland Civic Association Pancake Breakfast from 8 a.m. to noon both Saturday and Sunday.