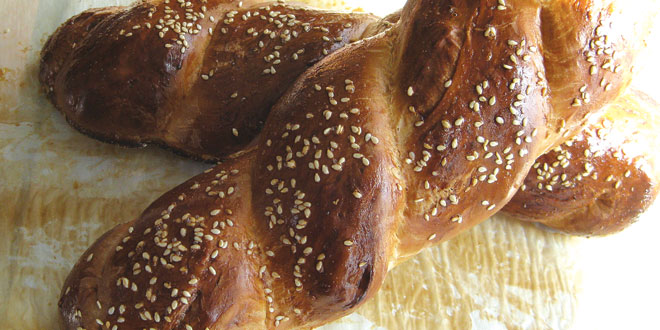 At sundown on Wednesday, September 4 the Jewish High Holy Day of Rosh Hashonah begins as Jews all over the world celebrate the observance of the Jewish New Year 5774. Actually, many observant Jews will begin to celebrate with Selichot services after midnight of Sunday morning, August 31. At this time penitential prayers are said before the High Holidays and for the ten days between Rosh Hashanah and Yom Kippur, the Day of Atonement. Erev (evening) Rosh Hashanah (the New Year or, literally, the ‘head’ of the year) begins at sundown Wednesday and continues on Thursday and Friday, September 5 and 6 with prayers and the blowing of the shofar, or ram’s horn. It is an awe-inspiring service of great emotional intensity, during which it is stated that the fate of Israel will be decided: who shall live and who shall die. It ends at sundown on September 6 with words of hope: “But repentance, prayer, and charity avert the severe decree.”

It is customary, during this time, to wish everyone a simple “Shana Tova” — a good year either in person or by exchanging greeting cards. It is also appropriate for non-Jewish people to wish their Jewish friends a Happy New Year or to send them cards.

After services in the synagogue, families celebrate at home with symbolic foods such as the traditional apples dipped in honey and honey cakes to ensure a “good and sweet year”.

Some Othodox Jewish families practise a custom known as Tashlich (casting off). They go to the banks of a body of water in which fish live, and say a prayer stating that they cast their sins into the water. They then turn their pockets and cuffs inside out and shake them, or throw crumbs representing sins, into the water.

Yom Kippur begins ten days later, Friday, September 13 at sundown. The very moving but unusual prayer, Kol Nidre is chanted, asking God not to take into account any vows that are made: a total annulment of vows made to oneself. During Yom Kippur, one asks God for atonement, the expiation of sin on the part of the sinner, and pardon, the forgiveness of sin while fasting for twenty-four hours.

On the day before Yom Kippur, some people perform a ceremony know as Kapporot, followed by acts of charity. It is considered a blessing to be able to eat well before Yom Kippur, to prepare for the twenty-four hour fast day. Fasting’s purpose is to purify one’s thoughts and increase the intensity of one’s repentance. It is a day of serious contemplation and self-examination.

Yom Kippur services conclude at sundown, with a single blast of the shofar. Upon leaving the synagogue, one hears the greeting: “L’shana ha-ba-a b’Yerushalayim!” (Next year in Jerusalem) to which the person greeted replies, “Amen!”

Everyone then shares a light form of refreshment, to “break the fast,” hoping to be inscribed in the book of life for yet another year.

During this time of self-examination and reflection that begins with the New Year, one cannot help but be reminded of one’s past and enjoy the nostalgia which accompanies memories of “home for the holidays” with the aroma of traditional food wafting through the air. What could be more welcoming than the scent of freshly-baked bread, the traditional challah that graces the table!

Poppy or sesame seeds for sprinkling

1. Put water, yeast, and sugar in the bowl of a standing mixer and blend, using a paddle.

2. Add oil, then add 2 of the eggs, one at a time, using the paddle to mix. Then switch to the dough hook and gradually add the flour and salt, then knead with the dough hook. Roll dough onto floured board and knead by hand.

3. Grease a bowl with nonstick spray, put the dough in the bowl and cover with greased plastic wrap and let the dough rise in a warm place for 1 hour.

4. After an hour, when the dough has almost doubled in volume, punch it down, cover, and let rise again in a warm place for another half-hour.

5. To make a six-braided challah, take half the dough and form into 6 balls. With your hands, roll each ball into a strand tapered at the ends, about 12 inches long and 1 1/2 inches wide. Pinch the strands together at one end, then gently spread them apart. Next, move the outside right strand over 2 strands. Then, take the second strand from the left and move it to the far right. Regroup to 3 on each side. Take the outside left strand and move it over 2 to the middle, then move the second strand from the right over to the far left. Regroup and start over with the outside right strand. Continue until all the strands are braided, tucking the ends underneath the loaf. The key is always to have 3 strands on each side, so you can keep your braid balanced. Make a second loaf the same way. When you are finished you can either keep a long braided challah or twist it into a round challah for Rosh Hashanah.

6. Place the braided loaves on parchment paper on cookie sheets.

7. Beat the remaining egg and brush it on the loaves, then sprinkle with seeds—or put the seeds in a small bowl, brush the loaves with egg again, then, dipping your fingers first in the egg, then the seeds, gently touch the humps of the braids with the seeds. Repeat until your challah is well decorated. Let rise another half hour.

8. Preheat the oven to 350 degrees and bake for 30 minutes or until golden. When the bread sounds hollow when tapped with a cake spatula, the challahs are done. Cool the loaves on a rack. Yield: 2 challahs.