Celebrate the Airport Authority’s anniversary on the Fourth of July

The public is invited to join the City of Naples Airport Authority in celebrating its 45th anniversary during an open house at Naples Municipal Airport Friday, July 4, from 1 until 3 p.m. The Museum of Military Memorabilia will host special World War II displays, refreshments will be served and mini-American flags will be given to those attending the celebration.

The Commercial Airline Terminal is located at the south end of the airport off North Road. There is no charge for parking.

Naples Municipal Airport began operation on Dec. 23, 1943, as the Naples Airdrome, built to support the nation’s War World II effort. After the war ended, the military transferred the airfield to the City of Naples and Collier County in 1948. By 1959, the city had full control of the airport and was spending more than $200,000 a year to support its operation. On July 3, 1969 – 45 years ago – the Florida Legislature created an independent authority at the request of the Naples City Council, and the management of the airport was transferred to the City 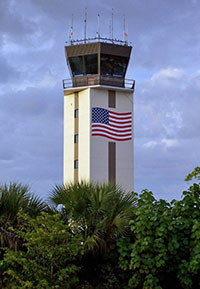 of Naples Airport Authority under a 99-year lease.

Since then, all funds used for the airport’s operation, maintenance and improvements have been generated from activities at the airport or from federal and state grants; the airport receives no property tax dollars. The Florida Department of Transportation values the airport’s economic impact to the community at more than $273 million annually.

The Museum of Military Memorabilia, founded in 2006, has collected more than 10,000 pieces with the goals of honoring the veterans who have and are protecting the cause of freedom, preserving artifacts associated with military history and creating a greater understanding of military conflicts among present and future generations. Last year, more than 13,000 people visited the 900-square-foot museum, which opened at the airport in 2011.

To learn more or to subscribe for email updates about the airport, visit www.FlyNaples.com.