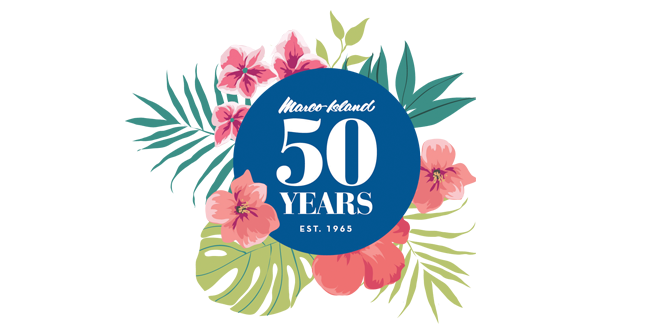 Much has changed on Marco Island since the Mackle Brothers ushered in the community’s modern era in 1962. It was then that the brothers – Elliott, Robert, and Frank, Jr. – went together with the heirs of Barron Gift Collier and established a joint venture to develop the Island. Their company, the Deltona Corp., created a master plan for the community the Mackles envisioned and also handled construction. In January of 1965, property in Modern Marco was made available to the public for the first time. The 50th anniversary of that momentous occasion will be commemorated the evening of May 1, 2015 at the Marco Island Marriott Beach Resort & Spa’s Islands Ballroom. Beginning at 6 PM, the black-tie optional affair will feature island artifacts from the last 50 years, hors d’oeuvres, dinner, a champagne toast and dancing to a live band. Members of the Mackle family will be among the special guests and the festivities will also include the Marco Eagle’s “Pioneer Award.” The hotel was originally built by the Mackles, who dubbed it “The Marco Beach Hotel.” Ironically, the end of the evening and the celebration’s end, will also mark the start of the facility’s transformation into its next incarnation as J.W. Marriott Hotel, in January of 2017. “We are so pleased to commemorate this milestone for the island by hosting the final event to be held in the ballroom,” said Rick Medwedeff, the Marriott’s general manager. The Marco Island Chamber of Commerce and the Marco Historical Society began planning the celebration last spring. The Historical Museum will mark the golden anniversary of Modern Marco by opening its permanent exhibit room in 2015, which captures the Deltona Era and provides an historical glimpse into history and development of Modern Marco.

“We are so excited to be showing off all of the historical items and memorabilia that were donated to MIHS, reflecting the last 50 years of Marco,” said Lorie Wagor, the museum’s enterprise manager. The event is sponsored by Woodward, Pires & Lombardo, P.A., the Marriott, the Naples Daily New, with contributions from a multitude of other Marco businesses. Attorney Craig Woodward said, “Marco has had a number of anniversaries before, the 25th, 40th, etc. but the community has gone all out for the 50th and it will be a fabulous event. For those of us who have lived on the Island for many years it is truly amazing the changes in fifty years, and I am sure that the Mackle Brothers would have been thrilled to see what their proposed community of 1965 has become today.”