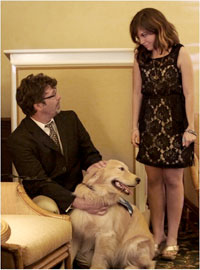 Scott Grant and daughter Shannon, 14, get acquainted with Fosse following a ceremony for them at The Moorings Country

A 1-year-old golden retriever named Fosse marked the successful end to his training in the Collier County Sheriff’s Office’s service dog program Thursday night at a ceremony where he was presented to the family of child who was paralyzed in a car crash.

But Fosse will have to wait a few more days before he can leave the Collier County jail, where he has been training with female inmates since June, and settle into his permanent home in Lee County with 11-year-old Hannah Grant and her family.

Hannah was unable to attend Thursday’s emotional ceremony at The Moorings Country Club. She has been in All Children’s Hospital in St. Petersburg where she has had three surgeries in the last 17 days to replace a failed shunt in her brain, said her father Scott Grant. The family is hoping she’ll be home for the weekend, he said.

Hannah was 6 when a distracted speeding driver struck the car she was in while it was stopped at a red light, leaving her paralyzed. Since that day in 2007, Hannah hasn’t been able to walk, talk or feed herself. All she can do is blink her eyes.

Scott Grant and his wife Lynn contacted the Naples-based PAWS Assistnace Dogs Inc. program about the possibility of a service dog for Hannah.

Since June CCSO has partnered with the PAWS program to train inmates as dog handlers and to have the inmates train the dogs to become assistance and service dogs for wounded veterans and children with disabilities.

Fosse is first dog to complete the training and be placed into a home.

The female inmates in the program have played an important role in assisting the PAWS trainers in the final phase of Fosse’s training.

For example, Fosse was taught to pull a rope to open doors and to raise his paws high and push to close doors. With his nose he can flip a light on in an instant.

Fosse also will be able to retrieve Hannah’s crash kit from beside her wheelchair in the event she has a seizure.

While Fosse will be able to assist Hannah’s parents with these and other tasks, his most important job is to be Hannah’s companion and a warm body for her to snuggle.

Linda Lair-Stewart, 37, a former inmate who helped train Fosse, was in the audience when Fosse was presented to Scott Grant and Hannah’s sister Shannon, 14.

“To see the end result and how much it means to them is awesome,” Lair Stewart said. “It means a lot to me that I made a difference. No words can describe it.”

Sgt. Adam Schank, who supervises the inmates and jail staff in the program, said it was “rewarding and humbling’’ to see the result of all of their hard work and what it means to the Grant family.

Sgt. Schank said the Corrections Department’s partnership with PAWS in the service dog program as well as its partnership with the Humane Society of Naples in the Second Chance Cell Dog program, in which inmates train homeless shelter pets for adoption, is in keeping with Sheriff Kevin Rambosk’s philosophy of “Service to others before self.”

There are currently six golden retrievers training to be service dogs at the jail. Come January, there could be as many as 10 dogs when four golden retriever puppies join the program, making it the largest class so far.

“We’re up to the challenge,’’ Sgt. Schank said.