Caves of the Yucatan Peninsula and Florida 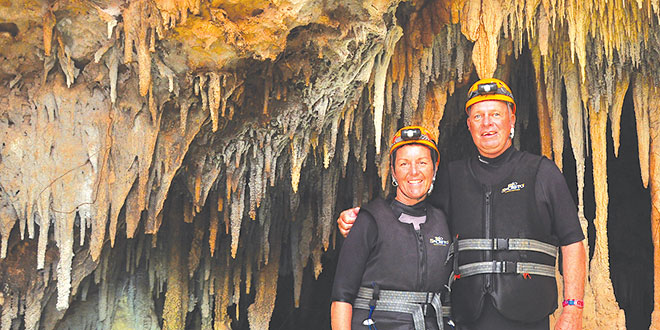 In early June of this year, my wife, Cathy, and I took the opportunity to visit the Yucatan Peninsula area of Mexico.

The marine life and geology of this region are positively fascinating. In addition to snorkeling with whale sharks — the largest fish on the planet — we ventured inland to Mexico’s jungles to learn more about the ecology. What we found was absolutely surprising.

This portion of the peninsula sits right where the Gulf of Mexico meets the Caribbean Sea. The closest land mass is Cuba, and just north of that is the Florida Keys and Southwest Florida. It is closer to Marco Island than any other part of Mexico.

Having lived in Tucson, Arizona, for a few years I am aware of the mountains that separate that state and Mexico. For some reason, I expected the Yucatan to be a similar terrain, but it is not. I felt like I was in one of the more tropical areas of Florida.

In its general geology, Florida is a relatively simply structure. The rocks are primarily of sedimentary origin that consist mostly of limestone, sandstone, shales and clays with the underlying foundation rock being a very massive and thick limestone.

The conditions under which this limestone formed was primarily a clear sea with an abundance of minute organisms. The shells of these small animals as well as shells from larger sea life compressed over thousands of years to form the limestone. Needless to say that the underwater fresh water flow, Florida’s aquifer system, has exploited these porous deposits to form underground rivers, sinkholes and, believe it or not, some very extensive caves in our state.

The Yucatan Peninsula is very similar. It is a limestone base with many, many underground rivers. The sinkholes there are called cenotes (say-NO-tays), and they were the primary source of fresh water for early inhabitants. Since the Gulf of Mexico and Caribbean Sea are salt water and there are no rivers on the surface of the peninsula, these cenotes are still a key to survival.

In both Florida and the Yucatan, the limestone is very soluble in water and has formed many caves and sinkholes. Over the course of thousands of years, these caves emptied their water content. Basically,

While riding thru the jungle we saw a small fox. Look to the far left of the photo and you’ll see the fox was staring at a 10 foot boa constrictor! PHOTO BY CATHY PRICE

as rainwater fell over a cave and trickled through the rocks, it picked up carbon dioxide and minerals from limestone, and the calcium carbonate caused formations on the cave roof called stalactites (in Greek, this means “to drip”). As water continued to drip, the length and thickness of the calcite grew, but it took a very long time for stalactites to form as they only grew anywhere from a quarter inch to one inch every 100 years. They are still growing today.

In addition to stalactites, there are formations on the ground that emerge called stalagmites. These are formed by the water dripping from the end of a stalactite that falls to the cave floor causing the calcite to create a mound. Soon after a stalagmite will form a cone-like shape. Sometimes the two will join together to create a column.

Helpful hint: Stalactites have a “c” and are found on the cave “ceiling”; stalagmites have a “g” and are on the “ground.”

Because of the types of plants, rocks and minerals on the surface, the water that drips with these items to create the stalactites can cause a variety of colors such as milky whites, golds, reds, grays and a variety of browns.

In the Yucatan, there are thousands of sinkholes, and according to The Aquifer System Research Center, the longest underground river in the world has been discovered here. It flows more than 95 miles. The cavernous rooms found here are simply majestic.

In Florida, there are more than 20 caves with a length of one mile or more, the longest being 18 miles. You can view stalactities and stalagmites at Florida Caverns State Park near Marianna. Like most caves of this nature, it is a series of connected rooms, and the features here will rival those seen at the famous Mammoth Cave and Carlsbad Caverns.

Limestone is the geological basis for both the jungle-like Mexican Peninsula and the multi-faceted Florida landscape — two regions so diverse yet so much the same. An underground freshwater system that provides life-giving nourishment for two completely different ecosystems, or are they?

Bob is the owner of Steppingstone Ecotours and a member of the Dolphin Explorer’s dolphin research team. He is part of Leadership Marco 2014 and Bob loves his wife very much!