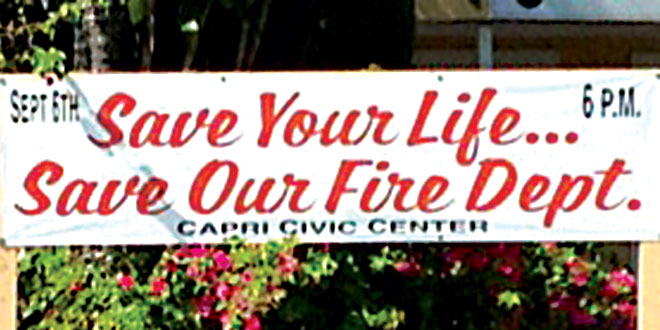 A storm is rocking the sleepy gulf community of Isles of Capri. This is a man-made tempest, though, fueled by a group of concerned citizens and firefighters who oppose the proposed consolidation of the Isles of Capri Fire-Rescue (ICFR) with the East Naples Fire Control Rescue District.

“We want to preserve jobs, but the most important thing is the life safety of our citizens,” explains Tim Garner, an engineer with ICFR. “(The firefighters) firmly believe there is no way that East Naples is going to come in with less personnel and give the same level service we provide now, and that is what they are saying.”

The issue is twofold. First is the debate over how many firefighters East Naples will commit to staff at the Capri fire house if the merger is successful, and second is how the manning of the fire house will impact the level of service to the community and homeowners insurance rates. A public forum on these issues will be held at the Isles of Capri Civic Center on Sept. 6, at 6 p.m. and promises to be a turbulent and fiery discussion. Signs are posted around the island advertising the gathering — “Save Your Life. Save Our Fire Department.”

To recap, the Capri fire district encompasses the residents of Isles of Capri, Mainsail Drive and some 280 homes in Fiddler’s Creek. It has been a scene of controversy for the last two years, including the dismissal of former Fire Chief Emilio Rodriguez, the discontinuing of response to Marco Island unless it is “a significant event” and a grassroots efforts from some serviced by ICFR to lower property taxes from 2.0 mils to 1.5 mils.

This spring, the Collier County Commission voted to force the consolidation of the Capri district with East Naples, despite a 3-2 vote by the Capri Fire Advisory Board rejecting consolidation. As such, East Naples proposed to take over and operate the Capri district at a 1.5-mil rate, to provide “hiring preference” to the existing Capri firefighters and to put a minimum of two firefighters on each shift at Capri. Currently, the Capri department staffs three firefighters per shift about two-thirds of the time and two firefighters per shift the rest of time. It has two engines and is serviced by two Collier County paramedics through the Medic 90 ambulance.

County Administrator Len Golden Price spent the summer mediating the creation of the inter-local agreement between the two departments. This document and the merger will be discussed by the Collier County Board of Commissioners at its Sept. 10 meeting.

In response, Capri firefighters are circulating a petition. They argue the East Naples proposal will decrease manpower at the Capri station and could possibly cause the station to lose its back-up engine. This, they contend, will compromise the community’s level of service and possibly increase homeowners insurance rates for island property owners.

“Why are we so expendable? Why are your firefighters expendable,” Garner asks. “There are a lot of issues… What the community really needs to be concerned about is their level of service.”

At the heart of the debate are community fire suppression ratings provided by New Jersey-based Insurance Services Office Inc. ISO’s Public Protection Classification (PPC) program uses these ratings to measure and evaluate the key elements of a community’s fire suppression system, including emergency communications, composition and geography of the fire department in the community and availability of water supply.

According to Robert Andrews, vice president of community hazard mitigation at ISO, the group analyzes these elements and assigns fire departments an advisory number on a scale of 1 to 10. Generally, Class 1 represents exemplary fire protection, while Class 10 indicates the community’s fire suppression program does not meet ISO’s minimum criteria.

In 2012, ISO rated ICFR a 4, while East Naples’ rating was a split 4/9. The 9 is the result of poor access to adequate water supplies in the rural areas East Naples services. In order to have adequate water coverage, all properties within a five-mile radius of a fire station must have a fire hydrant located within 1,000 feet. This is not always the case in rural areas. Marco Island Fire Rescue Department also rated a split 4/9 for the same water supply issues. ISO conducts its ratings analysis every three years.

If ICFR merges with East Naples, the Capri firefighters believe the decrease in firefighters per shift from three to two will decrease the level of service to the community. Moreover, they insist, the fate of back-up Engine 90 is uncertain because it was awarded to Collier County as part of a FEMA grant and not resident tax dollars. If East Naples takes over the Capri station, the firefighters are concerned Collier County would remove the back-up engine.

A question of risk, not math

Andrews would not speculate on how the proposed consolidation could impact a rating or homeowners insurance premiums.

Lynne McChristian, the Florida representative for the Insurance Information Institute, explains that how much an insurance premium will increase or decrease based on an ISO rating is totally dependent on how an insurance company formulates its premium and weighs risk factors, such as fire, flood and coastal locale.

“The fact is that different insurance companies have different ways of calculating premiums,” McChristian explains. “It also depends on how the insurance company uses the ISO rating… It is more important for people to understand their risk, and when people begin to panic about cost, the more important question is does my risk level change. The focus on risk may change something that needs to be done at the community level.”

“The fact is that you are dealing with more coastal risk (on Capri), which is probably a bigger risk than fire risk,” she continues.

While East Naples Fire Chief Kingman Schuldt concedes there could potentially be an ISO rating change as a result of the merger, he says the overall effect will “probably be neutral.” The only way the merger could negatively impact the ISO rating, according to Chief Schuldt, is if he consistently staffed two people per shift at the Capri house. The East Naples proposal calls for a minimum of two firefighters per shift, and Schuldt insists he will work to supplement the Capri staff with an additional firefighter per shift to maintain the resident’s current level of service.

Matt Crowder, a member of the Isles of Capri Fire Advisory Board, also disputes the firefighters’ claim that Engine 90 will be going away. In a letter to a Capri resident, Crowder wrote: “according to the latest research by Collier County and East Naples, the county commissioners can ask the grantor (FEMA) to transfer the engine to East Naples so it can stay at out fire station… Since the commissioners share our desire to maintain a comparable level of service after the consolidation, it is unlikely they would not want the engine to stay in our district.”

For the time being even if the merger is successful, Capri’s pre-existing individual ISO rating will stand until the ISO comes back for another assessment in about two years. Collier County Commissioner Donna Fiala just hopes this debate does not tear a harmonious and gracious community apart. “My hope is that the meeting on Friday will bring out the truth and not more accusations without any foundation. I’m aghast at some of the things that are being said, and more importantly, that some people are believing them,” she says.

Additionally, Fiala encourages concerned citizens to come to the BCC meeting on Sept. 10, but she warns against the continuation of extreme behaviors. “Citizen’s concerns are always a factor,” she concedes. “But, right now, there is so much dissension and acrimony between the Capri citizens that no one can base their decision on citizen’s concerns because they are all over the place, and (the commission) does NOT base it on who can yell the loudest and say the most hurtful things. That doesn’t win anyone over.”

A public forum on these issues will be held at the Isles of Capri Civic Center on Sept. 6, at 6 p.m. Fiala encourages concerned citizens to come to the BCC meeting on Sept. 10.