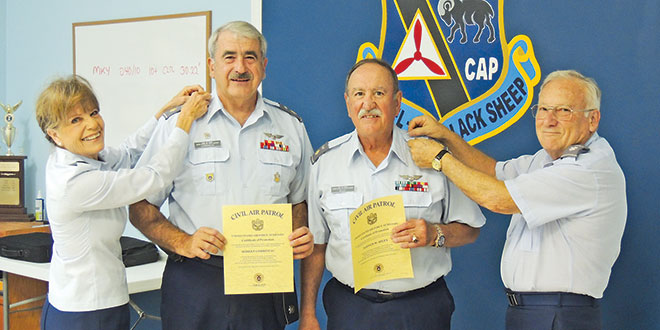 At the recent Marco Island Civil Air Patrol (CAP) Squadron meeting, two members were distinguished by their advancement to the rank of Major. They are Captain Robert Corriveau, Commander of the Squadron and also the Professional Development Officer, as well as Captain Steve Riley, Assistant Finance Officer and Fundraising Chairman. 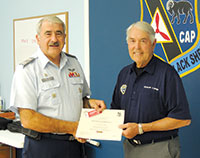 speaker for the meeting was Commodore Walter Jaskiewicz, Commander of the 7th District U.S. Coast Guard Auxiliary (USCGA). He gave a great talk about volunteer services in both CAP and USCGA and provided a detailed review of how the Coast Guard Auxiliary works to provide services and support to Collier County.

One other notable award was presented to Captain Richard Farmer, who received his ninth ribbon clasp for achieving a cumulative total of 90 homeland security missions.