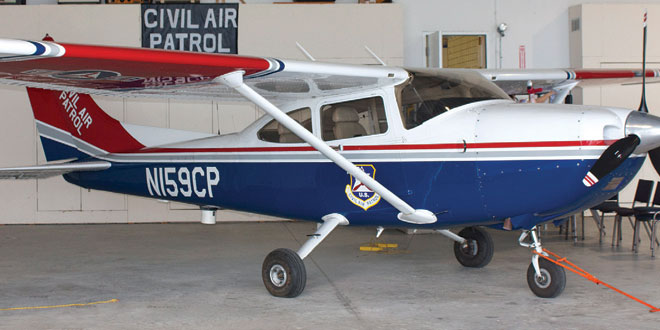 Since 1981, the Marco Island Civil Air Patrol has been surveying the skies of Marco and the Ten Thousand Islands. Whether it be a routine training flight or a search and rescue, the volunteer CAP members are always ready to fly.

But ten years ago, it almost lost its location at the Marco Island Executive Airport due to changes in hangar requirements.

In what has been dubbed “the accident,” CAP received donations – enough to build the 60 x 100 foot hangar that stands at the airport today. On May 19th, CAP celebrated the 10th Anniversary of the hangar, throwing a party on the premises. Many of the 52 Squadron members were there along with the Cadets that are trained out of 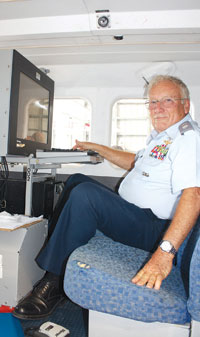 Commander Lee Henderson explainshow the computer in the Airvan works.

“The Cadet program is aerospace education, model rocketry and we teach them the dynamics of how to fly,” explains Naples Cadet Commander Bob Reiss. Information on joining the Cadet program or the Senior Squadron was readily available and anyone is always welcome to join.

Marco Island CAP flies two planes: a Cessna 182 and a Gippslan Airvan. The Cessna can go up to 150 mph and holds 4 people while the Airvan holds eight. Two seat were removed on the Airvan to install a computer that scans the ground, examining what it sees and pointing out things that are out of place – like a lost kayaker.

On the ground, the hangar has a radio room that can contact either plane, the 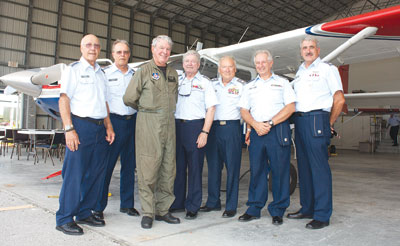 police, FWC, the Coast Guard and then some.

A nice office area and small kitchen space along with a large classroom make up the rest of the inside of the hangar.

“The Accident” happened as a result of several large donations, some of them a complete surprise. They came at the right time; just as the hangar being used would no longer be allowed; and they were accepted with great gratitude.

And ten years later, the Marco Island Civil Air Patrol is still grateful, celebrating ten years of a beautiful hangar that has enhanced the Squadron and made Southwest Florida a safer place to live.