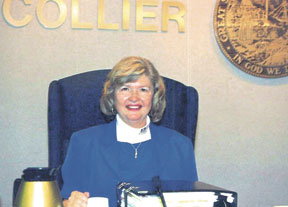 Donna Fiala has held the office of Collier County Commissioner longer than anyone else, and she’s done it as a woman. But in the beginning she never anticipated how far her journey would take her;

Donna Fiala has lived in the same East Naples home since 1974. She was the director of community relations for Naples Community Hospital from 1987 to 2000, and it was during that time that NCH encouraged her to find a way to get involved in her East Naples community. A daunting task since East Naples at that time was, as Fiala recollects, “devoid of anything to be involved in.” Nonetheless Fiala located the small East Naples Civic Association, which was so used to its unknown status that Fiala says, “they were so surprised to see me attending that they were actually suspicious!”

It’s almost funny to think it all started with landscaping medians;

Donna was elected president of the East Naples Civic Association. “It opened my eyes and I realized [with an elected position] that ‘the buck really does stop here.’” The first issue she tackled was the seemingly simple one of East Naples’ neglected medians. “There were well maintained medians all around us…so we brought Collier Naplescape to make a presentation to the Association.” They were dismayed to learn that there was a fifteen year plan in place to maintain attractive medians throughout the county, but not in East Naples. It took two and a half years to get East Naples included in the landscaping plan, and during that time Fiala learned her way around the complexities involved with creating progress when working within government agencies.

Fiala helped the East Naples Civic Association grow from 317 members to over 700 in one year. “The more we grew, the more power we were perceived to have.” However, they still experienced opposition from “a not very cooperative County Commission.” The notion was born for Fiala to consider running for a Commission seat herself. “We were considered the armpit of Naples and I wanted to rescue us from the deterioration of our community.”

The 2000 race was well contested, with candidates from both East Naples and Marco Island. Fiala had always maintained social ties and friendships on the island but she says “Marco was not happy [when I won]. They wanted their seat back.”

But anyone who’s raised five

kids can tell you all about balancing competing interests;

Fiala balances two constituent populations that could not be more dissimilar. In order to keep her finger on the pulse of many needs she participates in at least 15 community organizations in both East Naples and Marco Island. “I belong to organizations that are making things happen in the community.” It allows Fiala to learn about important issues and troubleshoot accordingly.

So the key to getting things done is remembering that in politics, as in life, there really is no ‘I’ in team;

“One person can make a difference, if they associate with the right people. If anybody thinks they can do it alone, they’re wrong!” Fiala ran uncontested in 2004 and in 2008, both times with the backing of both Marco Island and East Naples. She considered retiring in 2008 but couldn’t turn her back on the difference she believed she was slowly, but surely making. “The first time I ran, I ran for four years. I really thought that I could get everything done that I needed to do in that time,” she reflects with a laugh. “Boy was I ever wrong.”

Fiala says that she is on the cusp of helping facilitate transformation in East Naples through projects that have been a long time in the making, and she doesn’t want to back down until she has seen them through. “We want to bring new development with housing projects at Sable Bay, Hacienda Lakes and Naples Reserve. That’s over 1,000 houses each plus retail and restaurants…It’s a turning point for the economy.”

And even after your vision is creating transformation, the little things still make a big difference.

Along with the grand plans Fiala is trying to shepherd through is one familiar to her: getting simple resources directed to low-income East Naples communities; in this case, improving Eagle Lakes Community Park. “People don’t realize that we have more (low income) Habitat for Humanity homes in East Naples than we do in Immokalee.” Currently the park has no community center and no programming. “There’s nothing for these kids to do and we need to send them in the right direction.” Fiala has found grant money to build the center and is hoping for a pool as well. She’s back to leveling the playing field for her community: “All the other parks [in Naples] have them.”