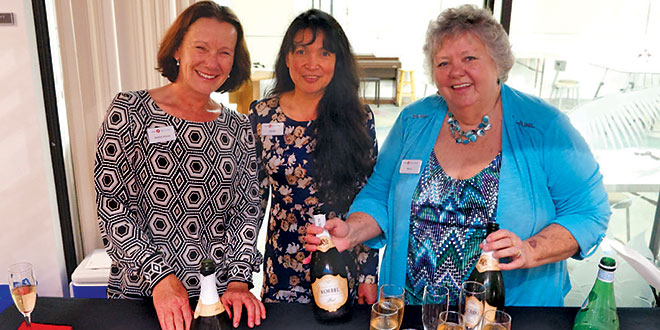 While our neighbors to the north are experiencing frigid temperatures, some lucky Canadians are enjoying a mild winter here on Marco Island. To celebrate the return of our seasonal visitors, the Canadian Club held a Welcome Back Party on January 27 at the Marco Island Center for the Arts.

The evening began in the entry of the Center for the Arts, where club members and guests mingled and networked. Those in attendance savored Norman Love chocolates, a local favorite, and glasses of bubbly champagne. The elegant treats were provided by BMO Harris Bank and Island Title.

Guests enjoyed a special performance of the play “Love Letters” by AR Gurney, which was performed by the Center for the 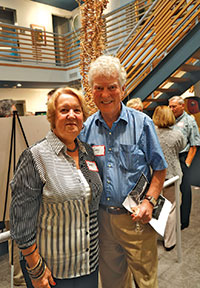 Sandy and Gary Elliott, founders and presidents of the Marco Island Canadian Club.

Gary and Sandy Elliott, Canadian Club presidents and founders, are originally from Ottawa, Canada. Gary says that he noticed that there was an Irish Club and an Italian Club on the island, but no Canadian Club. So Gary and his wife Sandy started one. “We thought having events on the island in season for Canadians would be a great way to network, have fun and provide a forum for Canadians to share their experiences.” Membership in the Marco Island Canadian Club is free.

Impressively, the Marco Island Canadian Club has over 300 members. Gary tells us, “Over 400 properties on Marco Island are owned by Canadians and thousands more visit 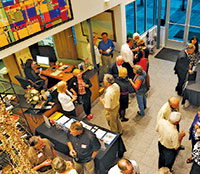 The Canadian Club drew a crowd to the Center for the Arts with its Welcome BackParty.

the island each year for vacation or business.”

Jo and Phil Whalen, from Toronto, are new Canadian Club members. The Welcome Back Party was their first club event. The couple, who has been on Marco Island for four years, told me that joining the club “seemed like a good idea.” Asked how she liked life here on Marco Island, Jo told us, “What’s not to love?”

The Marco Island Canadian Club holds three main events each year- in January, February and March. The Canadian Club tries to combine their social aspect with philanthropy- at the Welcome Back Party donations were collected for the Center for the Arts. 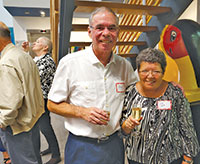 Jo and Phil Whalen, two of the club’s newest members.

Tuesday, club members will visit the Greater Marco Family YMCA, where they will have a healthy lunch and a tour of the facilities. There will also be a presentation by NCH Healthcare System about using Canadian Emergency Travel Medical Insurance Cards for emergency medical episodes while in the U.S., and a discussion about the new Blue Zone Initiative. Donations for the February event will be made to the YMCA.

The third club event will be a reception at BMO Harris Bank on Tuesday, March 22nd from 5 to 7 PM. “Like” the club’s Facebook page: Marco Island Area Canadian Club, to learn more about events. If you would like more information on joining the Marco Island Canadian Club, email Gary Elliott at marcoislandcondoguy@gmail.com.