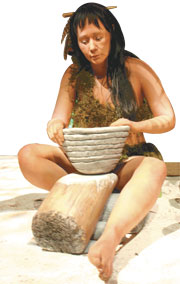 The Marco Island Historical Museum has come to life. A recent addition of four extremely lifelike Calusa Indian mannequins has visitors to the museum doing a double-take. Featuring an entire wing dedicated to the first known inhabitants of Marco Island, the realistic mannequins are only the beginning of grand plans for the Calusa exhibit and the museum as a whole. 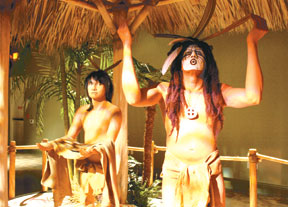 learn as the museum constantly evolves.

The Calusa display is the largest of all four rooms in the museum. Four staging areas take visitors through a day in the life of the Calusa. Each scene focuses on a different aspect. A shaman prays to the gods in the religion scene while daily life focuses on primitive fishing and the invention of pottery and tools. A shell mound scene will soon feature the Chief of the tribe, paying homage to the warrior aspect of Calusa life.

The mannequins in each scene were made using human-casted molds, giving them their realistic appearance. “You can even see the tendons in their hands,” explained Lisa Marciano, Museum Assistant at the MIHM. Made by Kodiak Studios Inc., of Brooklyn, New York, the mannequins were installed at the 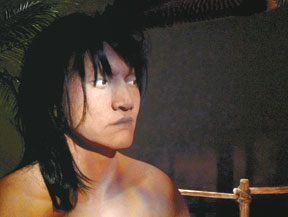 museum by Creative Arts Unlimited of Pinellas Park, Florida. The design/build firm has been transforming places such as The Joe DiMaggio Children’s Hospital, the Willy Wonka Chocolate Factory in Times Square and The Ritz-Carlton of Naples for the past 20 years.

Creative Arts Unlimited also added scenic lighting to the Calusa display, creating a realistic looking running river and pulling out color and dimension in the shell mounds. The scenes were also weathered to make them as realistic as possible.

Marciano said she hopes to work with Creative Arts in the future as more funding becomes free by way of either the County or the Marco Island Historical Society. “In the future we will have more mannequins. Hopefully [Creative Arts] will be utilized to do everything.” 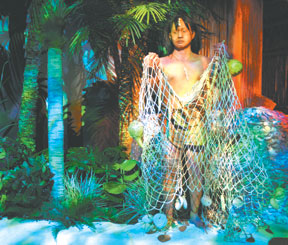 with more mannequins and information in the form of written and interactive displays. Shell tools, pottery shards and other finds from past and current archaeological digs will be on display as well. A vault space was installed when the MIHM was built in hopes to one day house the original “Key Marco Cat.” Found in 1896, the intricately carved cat is currently on display in the Smithsonian.

The ever-evolving Marco Island Historical Museum is free of charge. It also contains a beautiful gift shop that boasts local artwork and talent as well as the Rose History Auditorium which is utilized for plays, presentations and meetings. Open Tuesday through Saturday, the MIHM is located at 180 South Heathwood Drive. Interested in supporting the museum? Join the Marco Island Historical Society.