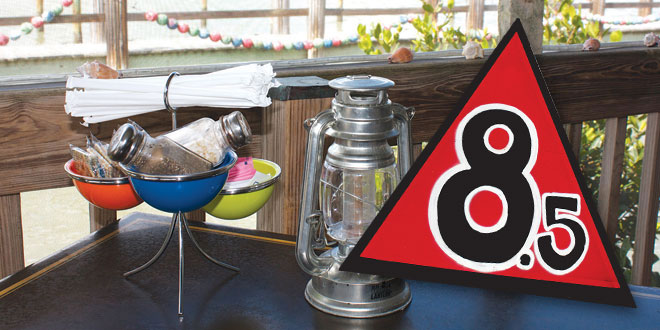 Fresh is exactly the word for the new and improved Marker 8.5, owned by the Head Chef Michael Duncan and his wife Laura. Located in Goodland and once known as Marker 8, the Duncan’s have already made some noticeable improvements that give the restaurant that same old Florida feel but with some unexpectedly fresh and unique changes.

Chef Duncan’s culinary history is as unique as is Marker 8.5. Born and raised in St. Petersburg, he is a true Floridian. He has traveled all over to work at some of the finest restaurants and resorts. Starting at 17, Duncan worked his way up the ladder. “I decided I was a pretty good cook so I should continue on with it,” he states. And so began a lifetime as a professional chef. Previously, Duncan worked as the Executive Chef for 15 years at the Angler’s Club Restaurant at the private Ocean Reef Club near Key Largo. More recently, he was the Executive Chef at the Naples Yacht Club for six years.

Oh, and he’s also a master ice sculptor. For the last six years in a row he has won The Taste of Collier’s Ice Carving Contest. And he’s never even seen snow.

But, enough about Duncan – obviously he’s qualified. Let’s talk about the food. “The biggest change 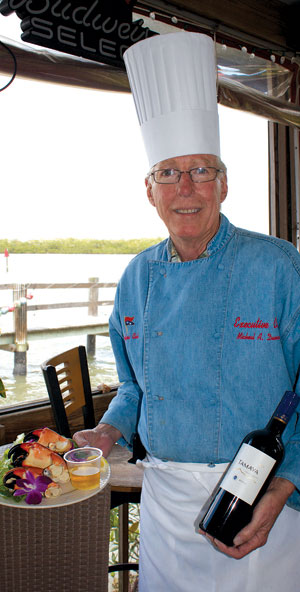 Chef Michael Duncan shows off his love of food and wine.

we wanted to make was to bring in more farm to table food, meaning fresh and local food. We want to move away from frozen and pre-packaged food items.” In fact, Duncan actually rents the property from local stone crabber, Butch Cameron, who supplies him with his large-sized claws. “He just pulls the truck right up and delivers them fresh off the boat,” adds Duncan. With stone crab season ending on May 15th, Marker 8.5 is the perfect spot to get one’s final fix of the year.

Not a fan of stone crab? There’s fresh tuna, yellow tail snapper and grouper. Fish not your thing? Try chef Duncan’s short ribs or lamb shanks. Every dinner entree is served with an edible orchid.

Breakfast and lunch fare is also served – sans orchid, but nonetheless delicious. Marker 8.5 is open daily from 8 AM until 9 PM, with Chef Duncan almost always at the helm, six days a week. The team takes Mondays off to recharge.

Or remodel. Since opening, the atmosphere has become much cleaner, the kitchen has been remodeled and painted, orchid plants and other flowers are present throughout the restaurant and matching caddies on each table for condiments add a touch of color and uniformity.

And there’s much more to come. “I love the old Florida feel so 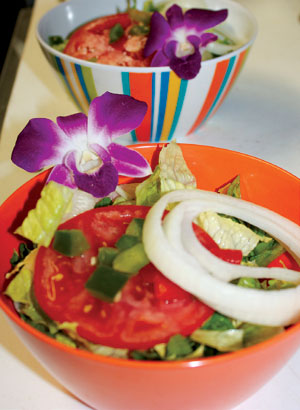 I really want to make the inside room full of local history,” adds Duncan. He’s also working on fixing up the docks in front of the waterfront restaurant. There are close to 20 slips available with only six currently functioning. Once the docks are in order the “Goodland Yacht Club” will be official. As folks step off their boats, they’ll pass through an archway with a sign reading as such. The outside picnic area just beyond will be transformed into a place worthy of dining or having a casual drink.

Flowers, lots of flowers, are on their way as well as a garden, just to make things a tad more fresh.

And now, back to the Chef for a moment, as it is important to note that he considers himself to, “have an ego when it comes to wine.” This is why he is excited to announce his wine and dinner pairings. “People have collections of wine and certain bottles or vintners that mean a lot to them. They can bring these bottles in and I can make a meal that will be the perfect compliment to the flavor of the wine.”

To make a wine pairing reservation or to learn more about the restaurant, call 239-394-8818. Otherwise, reservations are not required. Stop by and try Marker 8.5 at 123 Bayshore Way.