Business Brief: Down Under Designs 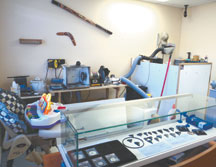 Jason’s workshop with wall decorations, including an Australian Didgeridoo and a boomerang. SUBMITTED PHOTOS

Tucked away in a small shop off North Barfield Drive, is an artist who has been working his craft for many years. Jason Wallett is a jewelry designer who crafts unique and original designs into custom made objects of art. Jason is a designer and goldsmith, originally from Australia, where he completed a five year apprenticeship in one of the highest end designer workshops in West Australia, which regularly receives national awards.

In his workshop, you can have your jewelry repaired, refurbished to look like new or redesigned from sketch through to final product.

Jason prides himself on making unusual and beautiful pieces using both classic and original methods and materials creating quality pieces that last a lifetime. All pieces are 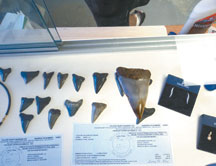 made 100% by hand in his workshop on Marco Island.

Of interest to many are the unique objects ‘d’art which grace Jason’s studio. There, one will find rare collectable coins, sharks’ teeth and collectables such as an original Didgeridoo and a boomerang straight from Australia.

Jason’s companion in his shop is his little six month old daughter, Chloe, who keeps her dad company during the day.

Jason invites residents and visitors alike, to stop in, say hello and look over his work. If you have specific jewelry designs in mind or would like to have him redesign existing pieces, bring him your ideas and see what he can create for you. Down Under Designs is located at 994 North Barfield Drive, unit #39. Telephone number is 239-248-2853.