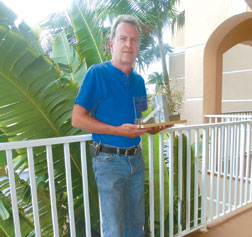 In the 1970’s Clarence Kneebone was a locksmith. He exemplified the American Dream. His locksmith experience led to him design an easy sliding glass door locking system, a deadbolt system for sliding glass doors. He believed in the idea so much he had a prototype made. Thus, the Deerfield Patio Door Lock was born. Then, he set out to sell the product. That is when his son, Steve, first partnered with him. After hitting the pavement and lots of hard work the company was selling 700-800,000 Deerfield Patio Door Locks per year with Sears being their biggest account.

The lock is unique compared to other designs because it can’t be removed and it resists forced entry or removal of the door from the track. The lock stands up when not in use 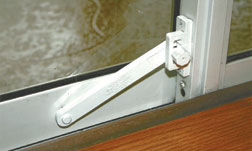 and there aren’t any pieces to lose. It doesn’t require complicated installation, only drill holes. One customer contacted them after an attempted break-in exclaiming how well the lock worked. The door could only be moved an inch or so regardless of the force used.

During his life, Clarence was a contractor, master furniture maker and boat builder. After an illness, he passed away in 2011. By that time, he held four patents. In his dad’s memory, Steve is renewing his marketing efforts on the Deerfield Patio Door Lock through a company he founded, JSK, Inc. The lock is now in its second generation design with another patent pending. The lock is die-cast in Miami, powder-coated and then packaged. Totally made in the good ol’ USA!

Through all of its downsizing, Sears stopped carrying the line. “The lock sells itself,” said Steve, “It’s now promoted primarily through locksmith magazines, family and friends.” You can contact Steve Kneebone at jskmarco@yahoo.com or 239-216-2815.