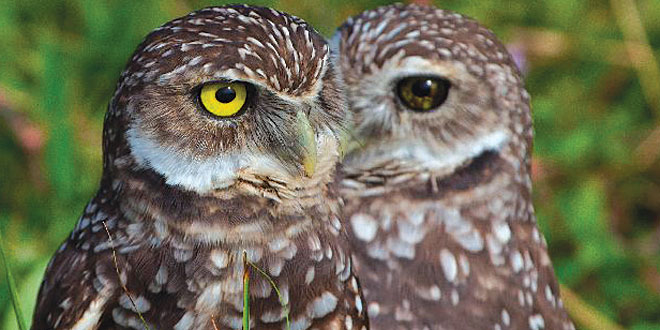 Phew! It rains and rains and that grass grows and grows! Have you noticed that this past summer? Ever since the 2013 Burrowing Owl nesting season ended in late June with the chicks fledged (can fly and survive on their own), a handful of volunteers have been managing and maintaining the 117 Burrowing Owl burrow sites documented on Marco Island. What does this mean?

Well, the Marco Island Burrowing Owl population is not migratory. Much to common misconception, the owls DO live here year round. Due to the high groundwater table that affects any burrowing animal’s habitat and the back-to-normal rain amount experienced this summer, many of the owls do not use their burrows after their young fledge. They prefer to perch in eaves or sills of buildings and quiet homes, canopy trees, culverts and shady quiet places – even under the high top tables at the Old Marco Pub or in a quiet corner near a drippy facet at an Elkcam storage/warehouse site! The owls are looking for shelter, shade and, being ever opportunistic raptor hunters, an easy meal of insects, frogs and lizards that may also be finding sanctuary in the same places. This is the time of year, when the owls are not propagating or caring for their young when they are dependent on the burrows not being disturbed, so periodic maintenance can be done to the burrow sites. So, in come the volunteers!

Like a typical rainy southwest Florida season, the grass and weeds grow as the rain falls daily. The volunteers, a.k.a. the “Owl Prowl,” weed-whack the vegetation which grows so fast it can close the burrow opening. The volunteers clip and weed-whack the vegetation that grows high around the burrow areas, replace the posting stakes, re-flag and post signs at the burrow areas to ensure the owls’ burrows are protected from the lot mowers and other disturbance and are not abandoned by the owls during the rainy season. This is done with hope that the Marco Island Burrowing Owl population is sustained and can hopefully survive as 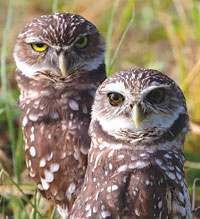 Most burrowing owls have bright yellow eyes, but only a few feature the recessive brown eye gene.

the island continues to be further developed. This management is based on several Florida studies that have shown that Burrowing Owls will abandon their burrows that have greater than six inches of vegetation growth around their burrow and, like many raptors, have “high nest fidelity” (use same nest or site each season) for nesting and producing young.

The 2013 Burrowing Owl season had an increased number of burrow sites from several previous season records, which equates to a sustained population that produced approximately 215 chicks at the 75 productive burrows (mating pair of adult owls). There were also approximately ten burrow sites that had a single adult owl that did not gain a mate or produce any young this season. This successful nesting season occurred even with a few permits issued by Florida Fish and Wildlife Conservation Commission (FWC) to remove burrows for construction of a home.

Marco Island’s Burrowing Owl population has been monitored and documented since February 2001 by Nancy Richie, City of Marco Island Environmental Specialist. Prior to cityhood, no agency was ensuring the conservation of this species on Marco Island by posting burrow sites and providing accurate information to FWC when development was imminent. The City’s conservation efforts have educated the community and ensured a sustained population to date. Many residents have become aware and even enamored with these charismatic ground owls. With the help of just a handful of hardworking volunteers, who are not shy of getting hot, dirty and covered in vegetation debris while maintaining the burrow sites in the rainy season, the Marco Island Burrowing Owl population is stable and even slightly increasing as development of the island continues.

Burrowing Owls (Athene cunicularia floridana) are described as having distinctive yellow eyes. This characteristic is well known and photographed often. Though, many years ago, a Marco Island Burrowing Owl was noted to have “dark” eyes. It was known as the “brown eyed” owl. When querying other biologists who monitor owl populations in the state of Florida, such as Cape Coral, Eglin Air Force Base and other smaller west coasts sites, 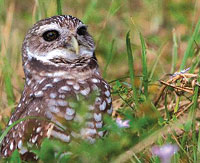 it was not documented in those populations. Only in Brevard County was it seen a few times. It is a very unusual characteristic and atypical to characteristics of a Florida Burrowing Owl’s yellow eyes that all bird identification sources describe. The Marco Island Burrowing Owls with the “brown” eyes are not exactly brown. Using close-up photography, the “brown” coloration was proved that the iris’ were mottled and more a mosaic or “tortoise shell coloring” of yellow, brown and green colors of the iris. To date there are only two, possibly three, Marco Island Burrowing Owls documented with this unique and atypical eye color. These Burrowing Owls may carry recessive genes that produce the mosaic eye color other than bright yellow eye coloring. If two adults with these simple recessive genes mate, they could produce young with the color morph characteristic. It would be an interesting study to understand what genetically is happening with the Marco Island Burrowing Owl population.

As the fall continues to winter with less rain on the horizon for our tropical island, the Marco Island Burrowing Owls will begin to prepare for their January through June 2014 nesting season. Adult pairs of owls will begin courtship, re-dig and “decorate” their burrow sites and once the female owl nests and lays eggs in the burrow, the male will take up his post as sentinel until the chicks hatch and emerge from the burrows. Marco Island is fortunate to have a such a close-up view of the Burrowing Owl and its life cycle. When you are out and about on the island and see orange flagging around a burrow site, take a look at these charismatic “ground owls,” you may just want to become an “Owl Prowl” volunteer!

For more information on the Marco Island Burrowing Owls or if interesting in volunteering, please contact Nancy Richie, Environmental Specialist, City of Marco Island, at 239-389-5003 or nrichie@cityofmarcoisland.com. Please give a hoot!

For more information on local locations to see wildlife, or interest in volunteering, please contact Nancy Richie, Environmental Specialist, City of Marco Island, at 239-389-5003 or nrichie@cityofmarcoisland.com

One response to “Burrowing Owls and Brown-Eyed Owls”