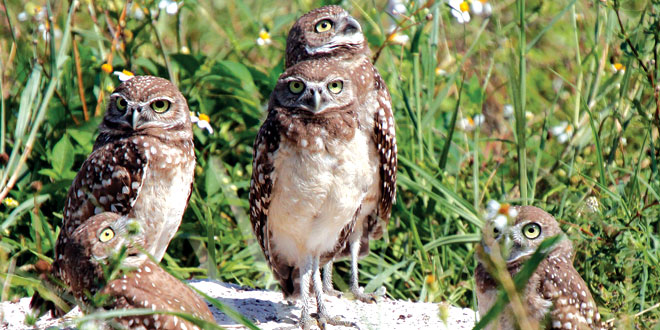 It is common knowledge on Marco Island that Florida Burrowing Owls (Athene cunicularia) are present, popular and so abundant that they are found in almost every neighborhood on the island. Not only do our residents enjoy these charismatic birds of prey, but people travel from all over the world to see them. Professional photographers charge top dollar to school the amateur how to photograph them in the “best light,” though any ol’ camera will do. One can’t go wrong when the subject has big yellow eyes, long downy legs and attitude that could take on a Bald Eagle (well, maybe)!

The Burrowing Owl nesting season each year, defined by Florida Fish and Wildlife Conservation Commission (FWC) in the Florida Administrative Code 68A-9.002 and 68A-27.005, is February 16 through July 14. This is variable on Marco Island, one the most southern and semi-tropical ranges for the Florida Burrowing Owl. Due to warm weather and year-long mild temperatures, nesting season can be earlier and burrows used year long.

This year, with such warm winter temperatures, Burrowing Owl nesting and hatching may be the earliest recorded. 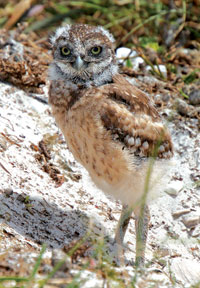 locations are already showing signs of nesting characteristics, such as very protective owl behavior, well-dug burrow tunnels and “decoration” or “feathering” of the burrow opening and mound. “Decoration” or “feathering” is material brought by the mating pair of owls to the burrow, such as feathers, shredded vegetation and debris and even animal feces. It is done by both male and female birds, but predominantly done by the male to “court” the female and camouflage the nesting site from predators. Over the years, interesting “decoration” has been noted, from beautiful red hibiscus flowers, shredded coconut husks, Big Gulp straws, men’s underwear (yep!), pieces of carpet and insulation, mini alcohol bottles, dollar bills and even a Marlboro cigarette case. Proving the old adage, one man’s trash is another man’s treasure and perhaps giving us a window into a particular neighborhood’s activities!

The official nesting/hatching season commences in July with all chicks fledged (able to fly). The 2012 season final count was 89 burrow sites on the island with 60 pairs of adult owls producing approximately 209 chicks with an average of three chicks per pair. These numbers are 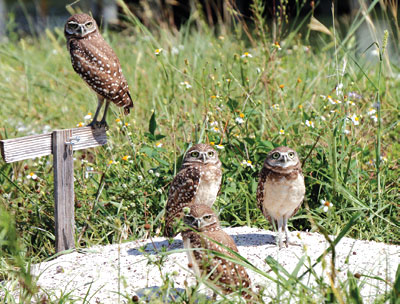 A clutch of Burrowing Owl chicks at the burrow.

above average in fecundity statistics reported in prior studies by biologists in Florida studies of this species. The typical fledgling survival rate is reported to be approximately one fledgling per clutch (A clutch can be one to seven owl chicks).

Last season on Marco Island, the Burrowing Owl population produced a “bumper crop” – more than any season since 2004. This may be due to an average rainy season after a few years of drought which provided increase of the food supply – insects, amphibians and small reptiles – for the chicks to eat, increasing survivability. 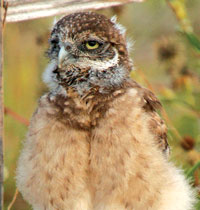 avid interest in the Marco Island Burrowing Owl population. She does weekly maintenance of about a dozen burrows – keeping overgrown grasses trimmed, maintains flagging tape, posts and signs and keeps sites clean of trash. She has also photographed each of the 111 burrow sites for documentation and reference for city data. Her magnificent photographs of Marco Island Burrowing Owls and their incredible behavior accompany this article.

If you want to enjoy the Marco Island Florida Burrow Owls up close, are interested in volunteering or have a burrow in your neighborhood that needs maintenance or posting, please contact Nancy Richie, Environmental Specialist at 239-389-5003 or email at nrichie@cityofmarcoisland.com.

The Florida Burrowing Owl is a Florida listed species of special concern and it, its burrow, eggs and flightless young are protected under Florida Administrative Code (F.A.C.) Chapters 68-9.002 and 68A-27-005, the Federal Migratory Bird Act and local City of Marco Island Protected Species Ordinance #01-34. For more information please go to myfwc.com/wildlifehabitats/profiles/birds/owls/burrowing-owl/ or contact Nancy Richie at 239-389-5003 or nrichie@comcast.net. Please give a hoot!