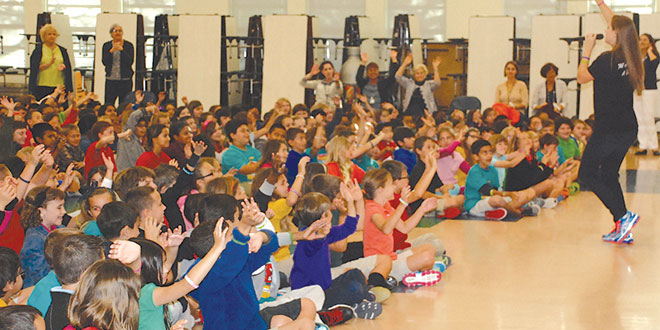 TBE students get into the beat. SUBMITTED photoS

One look at the South Florida native smiling, dancing and clapping in the cafeteria at Tommie Barfield Elementary, though, does not reveal the pain she suffered as a young child when she was bullied and teased by her classmates.

“When I was in elementary school, I was teased by the other kids,” Sider 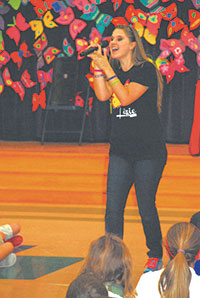 Sider sings from the heart.

told a captivated audience of TBE third, fourth and fifth graders. “They wouldn’t play with me, and I would walk around the playground and sing to myself. They would ask me to sing for them, and when I did, they would laugh at me and run away. I was so miserable I asked my parents to pull me out of school.”

It was her father, though, that turned those experiences into a mission for Sider when he told her “nobody has the power to ruin your day.” Now, Sider is on a 250-school anti-bullying campaign through California, Texas and Florida. Her program 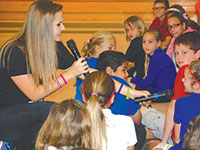 TBE students loved the Q & A session with Sider.

encourages kids to think twice next time they see someone being bullied or even think about bullying someone themselves.

“We decide what is going to happen, not other people,” Sider noted.

To prove her point, Sider asked everyone in the cafeteria — even adults — to close their eyes and to raise their hands if they had ever been bullied or teased. There was an audible gasp when all eyes opened and saw that more than half the people in the room had a hand raised. Sider also gave a long list of very successful and famous people who were bullied as kids, 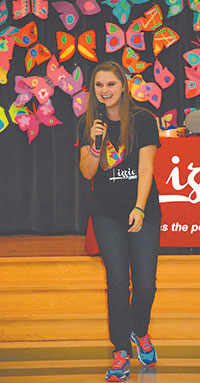 Sider shares a smile with her audience.

including President Barak Obama, NBA great Michael Jordan and Apple founder Steve Jobs. “They were all teased, but not only did thy overcome that but they never stopped believing in themselves and achieving their goals. Whatever you set your wings to, you can accomplish,” Sider said.

It’s a message Sider included in “Butterfly,” which she sang for the TBE students:

“I used to hide and keep inside

Afraid to show the world who I was

In shades of gray, I’d spend my days

They’d always put me down

Yeah, I let ‘em keep me down 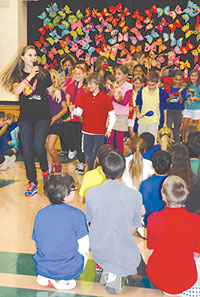 In honor of Lizzie Sider’s song ‘Butterfly,’ TBE students decorated the stage with their own butterfly creations.

and I’m wantin’ to fly

Let ‘em take me up and touch the sky

They thought they knew me plain and shy

But all along I was a Butterfly”

In addition to speaking out against bullying, Sider advocates for the Global Women’s Empowerment Network (GWEN), ImBullyFree.com, BullyVille.com, PACER Teens Against Bullying and is a Junior Board Member of The Alliance for Eating Disorders.

Ultimately, Sider wants to break the chain of bullying, and she encouraged kids to take action now. “Go talk to someone about your pain,” she urged. “There will always be people around us to help us and give us a support system.”