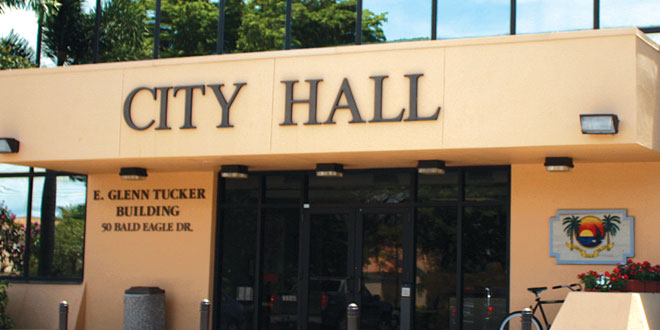 As of Monday, August 19, Marco Island’s budget process had sliced nearly $1.4 million out of the city’s proposed FY2014 budget.

More cuts are on the horizon, though, thanks to a deal proposed by City Councilor Larry Honig and accepted by Marco Island Fire-Rescue Department Chief Michael Murphy and City Manager Dr. Jim Riviere at the city’s Budget Workshop. The deal provides MIFR with its quick-response vehicle (QRV) this year and allows Murphy to hire three new firefigher-EMTs in FY2014.

The catch: It also requires Murphy, Riviere and all other city department heads to dig a little deeper into their budgets to find more fat to cut.The magic number is $168,161. This amount is what the city will pay to add one firefighter/EMT per shift — three shifts equals three firefighter/EMTs — in FY2014.

With the work of Deputy Chief Chris Bryne, the cost of the QRV has come down from $160,00 for a new vehicle to just $38,000 for a slightly-used vehicle. Riviere agreed to find that money in FY2013‘s more than $1 million estimated budget surplus. When he does, he will issue a purchase order for the QRV

Councilors were optimistic Murphy and Riviere will be able to come up with at least $80,000 in additional cuts, and proposed the difference come from the city’s $7.4 million uncommitted reserves fund. “The nut we have to crack is $168,160,” Councilor Ken Honecker, who also chairs the city’s Budget Sub-Committee, told the city council and workshop attendees.

At the heart of the issue is the level of service Marco Island residents receive from MIFR. According to Murphy’s workshop presentation, that level of service is falling because of growth on the island and in the surrounding areas serviced by Collier County’s emergency mutual aid agreement. Since 1998, the number of calls answered by MIFR has increased by 30 percent, and last year, the department answered nearly 3,000 calls.

“Our personnel are maxed out,” Murphy emphasized. “They are providing services out there, and they are the ones going home at night worrying about not being able to have answered a call. I don’t think our request is out of line. I think we have shown frugality throughout our system, and we have compounded our ability to do more and more with the personnel we have. But, somebody is waiting on this island (for our services).”

Honig agreed with Murphy: “I believe the fire department is paying the price for its frugality. They are among the most frugal departments in the city.” Moreover, Honig was prepared to rely on this history to help the MIFR and, ultimately, the citizens of Marco Island. “We know Chief Murphy is going to come in FY14 below his budget. He has a history of that, and he understands how to manage his budget in that parameter. He can go into his budget and find where he might be able to do that now.”

Councilor Larry Sacher pushed the issue further. “The fundamental question is what do our residents feel they are entitled to for what they pay. We pay a lot of money to live here. If I were to structure it from a service standpoint, I would put fire and police pretty much at the top of the list…My quick answer is that I would be in favor of (the deal).”

In the end, Council Chairman Joe Batte was frank with Murphy about the deal and his expectations.

“Let’s face it, Chief, we have been very generous this year when it comes to the fire department. It is time to sacrifice some areas for others. Right now, the people of Marco Island are not getting the services they deserve, and if there is a way to look at other areas that are not directly involved in health and safety, that would show really good faith on our part.”

Murphy humbly agreed: “I can probably pull $40,000 out of my budget. We will scrub the other side and hold tight.” He indicated he would come back to the city council with his additional cuts by September 3.

Just in case there was any confusion, Honig made clear the parameters of the deal. “The incentive here would be that you will only get the QRV and new personnel provided you find the money,” he noted. “If this is not done by September 30, you won’t get them.”