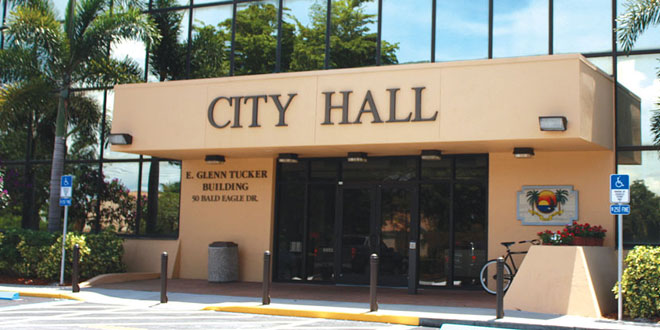 Marco Island City Councilors had a lot of questions during Monday’s meeting about the recent termination of the city’s former Community Affairs Director Bryan Milk. This left Interim City Manager Guillermo Polanco in the hot seat.

During his report to council, though, Polanco answered their questions, outlining the sequence of events that lead to Milk’s initial unpaid leave and subsequent termination after 15 years with the city. At issue was Milk’s reported business relationship with Michael and Lisa Kelly, the owners of Progressive Auto Care at 740 Bald Eagle Drive. Polanco discovered that until May 2013 Milk owned a stake in a business with the Kelly’s. Although he sold his share back to them, Milk continued to hold a promissory note on that sale, effectively continuing the connection.

On Dec. 31, Polanco suspended Milk without pay pending an investigation into the relations. Milk failed to appear at a 2 PM meeting with Polanco that day. Presumably, Polanco wanted to discuss the nature and status of Milk’s business relationship with the Kellys. He also wanted to know if this relationship posed a “conflict of interest” for Milk in zoning and land use decisions he made last year regarding Progressive Auto’s six-story facility. Polanco told City Councilors that he planned to give Milk the opportunity to resign from his post during this meeting, but Milk missed the meeting. It has been widely reported that Milk’s absence was due to illness; he contends he was diagnosed on Dec. 31 with bronchitis.

Further, Polanco discussed Milk’s termination letter, which he issued on Jan. 2. In the letter, Polanco wrote that Milk was being fired because he had not disclosed his business relationship with the Kellys and had not recused himself from evaluating land use matters involving the Kellys. “You failed to live up to the high ethical standards required of all Marco Island employees. It is critical that all city employees avoid even the appearance of impropriety,” Polanco wrote in the termination letter. He closed the letter by characterizing Milk’s failure to meet with him or return phone calls on Dec. 31 as “insubordination.

Polanco presented to council the city and state regulations that supported his actions. The basic gist of these rules are that “no city employee shall have personal investments in an enterprise, which will create substantial conflict between his/her private interest and the public interest,” and if the employee does have interest in a business, he or she must file a sworn statement to this effect with the Circuit Court Collier County, a copy of which must be given to the city.

“To the best of my knowledge, the business relationships were not communicated to anyone at the city as required by law,” Polanco said during his report. “Once I became aware of the conflict, I informed each councilor of the issue and informed them that my decision was that Bryan Milk could either resign or be terminated based on these facts.”

The one question weighing on some of the city councilors’ mind: “Was there an internal investigation prior to terminating Milk?”

“I am not sure-footed here,” said Councilor Larry Honig. “But, the original communication was that Milk was suspended without pay pending an investigation. Two days later, he was terminated. I question whether the termination was appropriate. Why didn’t we go ahead and have investigation and then terminate him?”

Councilor Chuck Keister agreed: “It was my understanding (from) with the (city’s) contract with Gil that he had to bring a decision before council before making changes in staff. We are talking about a director here…I feel it was a bit premature to move forward without an investigation…We need to get a report and recommendation from the city manager regarding the situation.”

Supported by Keister, Honig suggested that an independent third-party investigation be conducted, but his motion received no traction from the rest of council. In fact, the question of whether or not an internal investigation of any type was conducted was never answered, and city officials refused to comment on the specifics of Milk’s termination, stating that the information is not covered by public records law and that “personnel actions are usually not topics for which interviews are granted.”

Vice Chairman Larry Sacher and Councilor Joe Batte disagreed with Honig and Keister. “The reality is that Gil is city manager,” Sacher said. “It is not our job to micromanage him…This certainly appears to be a very black and white situation. Had Gil not acted the way he did, then we would be subject to more criticism.”

Batte took it a step further, finding support in the city charter. “Our job is to support (Gil’s) decisions. The charter is extremely clear here. We have no role in what the city manager did — absolutely none,” noted Batte.

“To talk about this right now is bothersome because it questions the authority of the city manager,” he added. “Things have happened and a decision was made. That is what he is paid to do and what the charter requires him to do.”