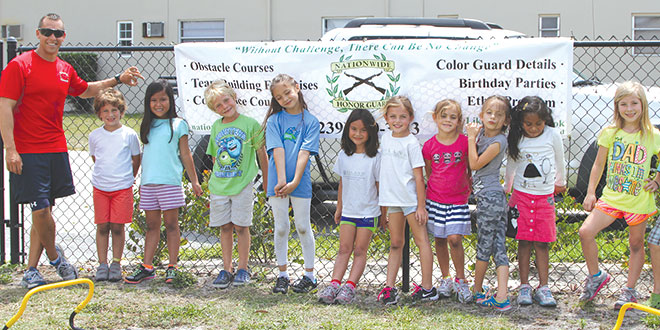 Mr. Matt and the elementary-age class at Island Montessori Academy.

Squeals of delight and giggles float through the air. Children’s voices raise to chant the names of their classmates as they cheer for them. Little feet blaze through the grass, jumping over short hurdles and short-stepping it through a rope ladder. Each one dives under a noodle arch with abandon. These are the sights and sounds of a physical fitness class at Island Montessori Academy.

This is not your average, run-of-the-mill P.E. class, though. This one is run by Matt Gordon of Nationwide Honor Guard, and “Mr. Matt’s” class builds the bodies, minds and spirits of the children at IMA. Following the obstacle course are jumping jacks, squats and mountain climbers, and then it is off to “school circle” where Mr. Matt and the children take a moment to remember why physical fitness is 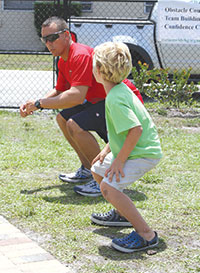 Mr. Matt incorporates a number of calisthenics to get the kids warmed up.

“To be healthy and strong,” one child says.

“That’s right,” Mr. Matt acknowledges. “Exercise also helps us sleep better, do better in school and have more energy throughout the day.” Little do the children know that this simple act of sitting and talking quietly is preparing their minds to head back to classroom for more learning time. They just enjoy the last few minutes they get to spend with Mr. Matt.

Classes like this one at IMA and other small private schools throughout Lee and Collier counties with limited resources are the brainchild of Gordon and his Nationwide Honor Guard business partner, Paul Greenleaf. The two men started the company two years ago with a vision of instilling the core values of discipline, commitment and patriotism into today’s younger generations. 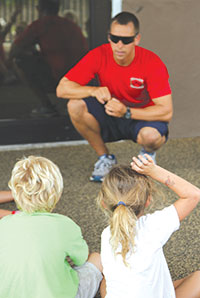 The ‘school circle’ allows the kids a few minutes to wind down before going back into the classroom.

to have a positive impact on the community,” Gordon notes. “Our motto is ‘without challenge, there can be no change’.”

This philosophy harkens back to their military service and training, as both men were U.S. Marines. While Greenleaf served in Somalia, Gordon served in Afghanistan and still is an active reservist. Their business concept began as an American Flag etiquette class, explains Gordon: “Everything you want to know about what the flag means, how to handle it, how to fold it, how to store it. Everything. It was a bit like a junior ROTC.”

Nationwide Honor Guard expanded from there into a color guard, again getting kids involved in the proper and respectful display of the flag. They were taught to march with the flags as well, and even would present the colors at various memorial services in 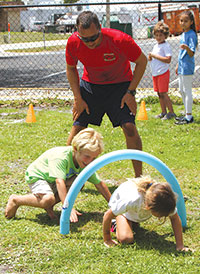 The obstacles course takes kids through the air and on the ground.

the area. Next, they began to focus on physical fitness. When Gordon was a Marco Island police officer, he volunteered his time to hold physical fitness classes for the students of IMA and the community as a whole.

The idea behind the fitness courses relies on Gordon and Greenleaf’s military training to capture the attention of even the youngest children — and all without raising their voices. “The recent generations have fallen apart when it comes to discipline. We focus on team building and helping the kids to realize that they can make more of a difference collectively than alone. Kids are begging for discipline and boundaries, and help them with that by setting principles and guidelines for behavior,” notes Gordon. 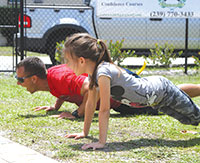 According to Lisa Nguyen, director of IMA, Gordon and Greenleaf’s approach works with her students. Gordon has been working with the IMA students since August of 2013, conducting six weekly sessions within a three-month semester. Nguyen says his program goes well with the Montessori curriculum of teaching the whole child.

“It works with the range of age groups and can be modified to accommodate multiple age groups,” she explains. “Matt is very strict but very fun, and the kids get a lot out of it especially being outside and physical. We really encourage nutrition and healthy choices. It has been a good fit this year.”