Bring Back the Good Old Days 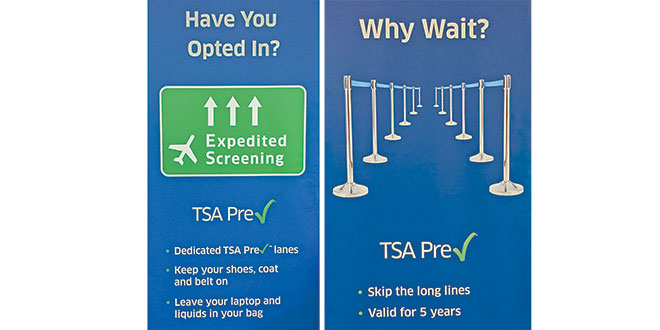 Remember the “good old days” of air travel? Shoes, belt, jacket, scarf could remain on your body without having to take them off to clear security. You didn’t have to pull out your quart size zip lock bag of small size liquids such as Purell, or your laptop for special inspection.

For $100 or less, the Transportation Security Administration (TSA) and U.S. Customs and Border Patrol (CBP) offer programs that can help bring some of those good old days back. If your travel is primarily domestic, there is TSA Precheck, (TSA Pre?); for international travel, Global Entry (GE). If travel is typically just between the U.S. and Canada, there is also the Nexus program.

With TSA Pre?, which costs $85 and is good for five years, there is a special line at security that is usually shorter than the regular line and travelers do not have to take off their shoes, belt and light jackets; 3-1-1 liquids and laptops do not have to be removed from carry-ons.

The application process, which is made online, is quick and simple. At the time of application, you schedule an appointment for an in person interview. At the interview, you must bring a valid photo ID, such as a passport or driver’s license, and proof of citizenship, such as passport or birth certificate.

There are numerous convenient application centers for TSA Pre?. In South Florida, there are centers in Ft. Myers, Miami, Ft. Lauderdale and Key West. At the interview, you are asked the same questions that were on the application, and will be photographed and fingerprinted. You will find out if you are approved within a week’s time.

Once approved, you receive a known traveler number (KTN) to use when making flight reservations. You are not given a special card, but rather just the number, which you must register with airlines that recognize this program. A caveat with TSA Pre? is that at this time it is only offered through most domestic airlines and Air Canada, and your KTN may only be recognized 80-90% of the time. There are plans to add more international carriers, but at this point, they are only plans.

Global Entry, part of the U.S. Customs and Border Protection’s Trusted Travel Program, costs $100 and is also good for five years. If you have GE, you do not have to apply for TSA Pre?. GE offers expedited processing when reentering the U.S. There is no paperwork (i.e. those blue custom forms) to complete, no long lines in which to wait, and special kiosks speed the reentry process. Most of the time, if you have GE, you will receive TSA Pre? privileges when obtaining your boarding pass for flights out of the U.S., as long as you provided your traveler profile information to the participating airlines prior to departure. Showing your GE card at the TSA checkpoint won’t work.

The list of eligibility requirements is available online at the Customs and Border Protection’s website. Basically, as long as you have a U.S. passport or residency card and have not violated any customs or immigration laws and are not a criminal, you qualify. The good news for German citizens is that you are also eligible for GE, as are citizens of the Netherlands, Panama, South Korea and Mexican nations. Canadian citizens are eligible for the same benefits via the NEXUS program.

The application process for GE is a little different. You apply online and after you receive approval, an appointment for an in person interview must be scheduled. In addition to providing identifying information and answering some questions on the application, a list of all countries visited in the last five years must be provided. You must bring your passport or resident card and another form of ID, as well as a printout of the approval email for the in person interview at which they will also take a photo and fingerprints. If approved, the GE card will be mailed to you within two weeks. GE enrollment center locations are more limited than those for TSA Pre? and the wait time for an interview can be long. The South Florida centers are located in the Miami and Ft. Lauderdale airports. When I tried to apply for Global Entry through the Salt Lake City airport, the wait time for an interview was three months.

If you already have Global Entry and renew your passport, you must go to the Global Online Enrollment System website and input the new passport’s number. Log in to your account and look for the “update documents” link.

The U.S. Customs and Border Protection is also trying some other programs to help speed up the reentry process for U.S. citizens. Mobile Passport Control is available at Miami, Atlanta, Seattle, Chicago, and San Francisco International Airports. Using an app that can be downloaded to a smart phone or tablet, travelers create a profile, complete information about their current trip, answer customs questions, take a “selfie” photograph, and then receive an electronic receipt containing an Encrypted Quick Response (QR) code good for four hours, which is then shown to a CBP officer. According to people I know who have used this app when reentering from South Africa to the U.S. at Atlanta, it works well in speeding up the process. There is no preapproval necessary, nor any cost to use this app, which is available for both Apple and Android products. It is anticipated that this program will be expanded to additional airports in the future.

Another program to expedite the process, Automated Passport Control (APC), is in use at 25 airports, including Miami and is available to U.S. and Canadian citizens as well as eligible Visa Waiver Program international travelers. At self-service APC kiosks, passengers re-entering the U.S. scan their passports, take a photo of themselves, and answer some questions. A receipt is issued, which then is handed to a customs officer.

The last time we reentered the country at Miami, we were directed to a self service kiosk. There was no line and we completed the process quickly. In fact, someone using a Global Entry kiosk near us took longer because she was having some difficulty with the machine.

So, which program do I have? I opted for the TSA Pre?. I did not want to have to travel to Miami for my interview and when I tried in August to schedule a September appointment in Salt Lake, I found they were booked solid through November. I considered trying to schedule an appointment in Miami the next time we were flying out of there, but the reality is that I have never found going through customs and passport control too onerous. What I do REALLY hate is having to take out my laptop and external hard drives I use for backup at the TSA security check point. Since I only bring my laptop when I travel domestically for a long period of time, I realized that being able to not have to do that would improve my travel attitude considerably. And, it has; the first time I used it, I breezed through security. The only item I had to take off was my passport neck holder; everything including laptop and liquids stayed in my carry-on.

The information above was accurate at the time of writing this column. Processes change; for the latest regulations, check the TSA website at www.tsa.gov, and the U.S. Customs and Border Protection site: www.cpb.gov.