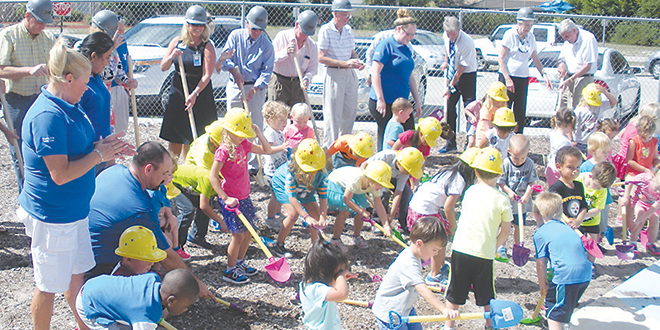 Children from the Greater Marco Family Y’s preschool help the adults with the ceremonial turning of earth.

Cindy Love was almost at a loss for words when contemplating the fact construction is about to begin on the Greater Marco Family YMCA new $1.2 million youth development center. “I’m so excited and thrilled, I’m fighting back tears,” said Love, the Marco Y’s CEO, at the recent groundbreaking ceremony for the 5,750 squarefoot center that is slated to be open by Sept. 1. “I’m very, very excited. I’m excited for the whole community and for our kids especially,” Love added. “I’m just excited to be able to make a dream come true.” The new facility will sit along Sandhill Street, next to the pool, occupying the same footprint as the existing youth center. It will feature two large multi-purpose rooms, a computer lab, a sick bay and a kitchen where children can be taught about healthy eating. It will also include age-appropriate exercise equipment, which can also be used by the 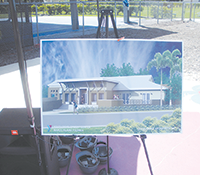 Y’s preschool’s fitness program. Steadily rising enrollment in afterschool and youth fitness programs and summer camps has made building a new Youth Development Center a priority for the Y. Its programs include children ages 5-12 from the island, as well as from Manatee, Parkside and Avalon elementary schools in East Naples. The Y has afterschool programs at those schools, and also operates summer camps on Marco, as well as the Manatee, Parkside and Avalon day camps. The groundbreaking ceremony was attended by members of the community and the Marco Y’s board of directors, as well as a host of local dignitaries, including members of Marco’s city council, city manager Roger Hernstadt and Sandi Riedemann, executive director of the Marco Island Area Chamber of Commerce.

In her remarks, Ashley Lupo, a Marco Y board member chairman of its Strategic Planning Committee, said the new Youth Development Center “critically needed” and will be “a real boon for

Officials from the Greater Marco Family YMCA and local dignitaries prepare to dig in and lift the first shovels of dirt to commemorate construction of the organization’s new new youth development center.

the children we serve.” Lupo said $1.25 million has been raised for the project, which includes outfitting the building. nother , is needed to leverage another $175,000 in matching funds. Brandi Garwood and her husband Eric are Marco Y members who also have children in the organization’s preschool and after-school programs. Brandi Garwood described the new facility as a “visual beginning of a new milestone at the YMCA.” The existing, makeshift youth center is bursting at the seams, with a maximum capacity of 23 and more than 50 children enrolled in the campus’ afterschool program. Love has said that children in the after-school program currently have to do their homework in the gymnasium because of the space crunch. She has also said that about 1,000 children were enrolled in the summer camps last year, up from the roughly 700 children served in 2013, with an additional 300 children expected this year in the summer camps and after-school programs.