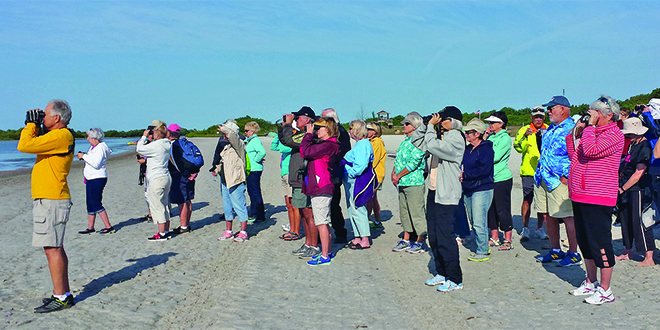 The Friends of Tigertail Beach presented their twelfth Breakfast & Birds for the community on Saturday, January 28th. Over sixty attendees arrived to share donuts and hear information about the birds they could be spotting that morning. Vice President Susan Kubat and member Fran Huxley, who are also beach walkers for the Conservancy, gave their talk on the various descriptions and behavior of the birds they could expect to see. Soon after, the crowd moved to the water’s edge at the lagoon to search for the birds.

Before departing, Bill and Sue Volp and Rich and Nancy Bizup from Pennsylvania and Chicago were asked what they thought of the event. They were so glad they came to the presentation and said that they found it, “extremely educational, informative and the donuts were good.”  They were especially glad 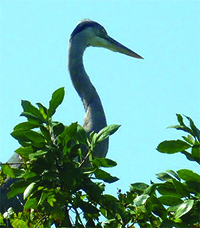 that they could now distinguish between the plovers and the sanderlings.  Over seventeen species were spotted that morning. Some of them included pelicans, blue heron, Wilson’s plover, black bellied plover, semi-palmated plover and osprey.

The resident ospreys were seen bringing food to their nest. We are hoping that chicks will soon be spotted from the viewing tower.

A pair of blue herons was spotted flying low over the beach. It is thought that perhaps one of them was the blue heron that was recently rescued and brought to the Conservancy with a fish lure in its neck. The bird was just released a week or so ago.

The Friends of Tigertail Beach will present its annual Discover Tigertail event on Saturday, February 25th from nine to noon.  This is a fun educational day at the beach for everyone.

For more information and schedules, please check out Friendsoftigertail.com and Facebook/Friends of Tigertail Beach.