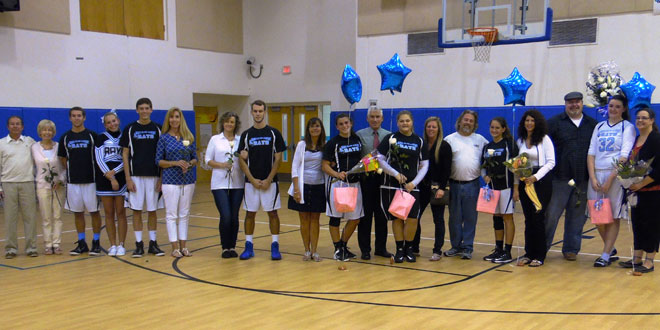 Proud parents stand with their children as they were honored at Marco Island Academy Senior Night.

The Marco Island Academy’s boys and girls basketball teams were recognized at Senior Night on Tuesday (Jan. 20) between the two varsity games against Evangelical Christian.

The daughter of Michael and Donna Vale, Victoria has been co-captain since the school’s first basketball team four years ago. She has been the team’s leading 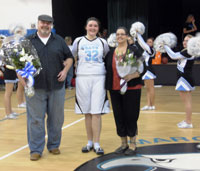 Sarah Colburn, with her parents, Angela Burns and Richard Colburn, was among seven seniors honored on the boys and girls basketball teams at Marco Island Academy Senior Night.

scorer every year. She has lettered all four years in basketball, cross country, track and volleyball. She is a member of Key Club.

The daughter of Ron and Paul Ragan, Jessica leads the team in defense. She also has lettered in volleyball and cross country. She is a member of Student Leadership and National Honor Society.

The daughter of John and Tracy Solinas, Alyssa is co-captain of this year’s team. She has lettered each year in basketball and volleyball. She is a member of Key 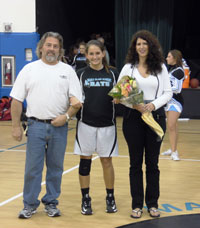 Jessica Ragan, with her parents Ron and Paula, as she was honored at Marco Island Academy Senior Night.

Club. Her advice to teammates, “Strength doesn’t come from what you think you can do, it comes from overcoming the things you once thought you couldn’t do.”

Angela Burns and Richard Colburn escorted Sarah who has been a member of the girls basketball team for two years. She is a key defender and rebounder on this year’s team.

Sharing first place in the district for the first time in school history highlighted their list of basketball memories.

Escorted by his parents, Debbie and Steve Servente, Peter 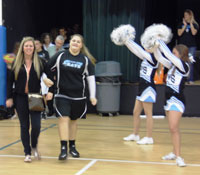 Alyssa Stolinas, with her mother, Tracy, walk through a cheerleading guard to honor her on Marco Island Academy Senior Night.

has seen the development of the basketball program, being a leader all four years. He is the second leading scorer in school history, behind Cole Stretton. He also has played cross country, football, baseball and tennis. He is a member of the National Honor Society, Interact Club and Fellowship of Christian Athletes.

Parents, Phillip and Michelle Reese, escorted son Preston. Preston also was a member of the first basketball team with Servente. He has 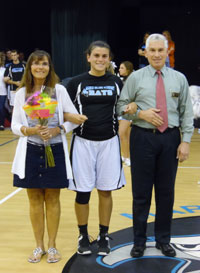 Victoria Vale, with parents Donna and Michael Vale, as she was honored at Marco Island Academy Senior Night.

also lettered in football, cross country, baseball and track. He is again one of the top two rebounders in the county. His memorable basketball experience was in his freshman year when the Rays beat Everglades City after losing to them by 43 point earlier in the team’s first season.

Connor Schmidt, escorted by his parents, Chris and Cathy, is a two-year letterman in basketball and also has played soccer, tennis and golf. He is a member of the Key Club and has been a reading tutor for elementary students in Collier County.