Book Review: The Healing of America 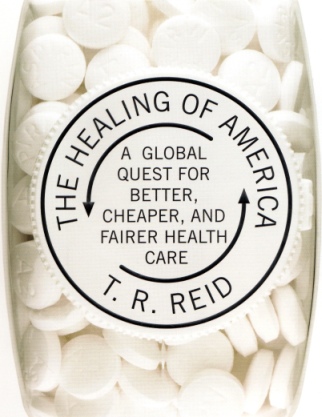 This book is a must for anyone confused by talk of health care plans. Well, I guess that just about covers everyone. T.R. Reid’s “global quest for better, cheaper, and fairer health care” is an easy-to-read explanation of the choices that exist and some of the tunnel-visioned, mind-blocked people who will be making them.

Reid begins with the sad tale of 32-year old Nikki White who died prematurely of lupus. Once diagnosed, she could not get heath insurance.  She had too much money to qualify for medical welfare assistance, yet could not afford to pay for doctors’ services and medications herself.

“Nikki didn’t die of lupus,” her doctor stated, “she died from complications of the failing American health care system. It was lack of access to health care that killed Nikki White.”

With that sobering thought author Reid, cognizant that America leads the world in its spending on health care (15.3% of GDP in 2005), takes his aching but not terminally ill shoulder on a worldwide tour of various health care systems.

First of all Reid clearly and briefly analyzes existing systems in various countries, showing surprisingly that the U.S. has elements of each in its current bewildering health care system.

The Bismarck Model: found in Germany, Japan, France, Belgium, Switzerland, and to a degree in Latin America. For most working people under 65, workers and employers share the premiums, with the insurer picking up most of the tab for treatment and the patient either making a co-payment or paying a percentage.

The Beveridge Model: found in Great Britain, Italy, Spain, most of Scandinavia, Hong Kong (a version). This ‘socialized medicine’ is also found in its purest examples in Cuba and “the US Department of Veterans Affairs, where all health care professionals work for the government in government-owned facilities and patients receive no bills.” This is applicable to Native Americans, military personnel, and veterans who do not receive medical bills.

The Out-of-Pocket Model: in Cambodia, India, Egypt. 45 Million uninsured Americans have access to medical care if they can pay the bill out-of-pocket at the time of illness or if they are sick enough to be admitted to an emergency ward of a public hospital or charity clinic.

In America, an orthopedic surgeon recommended Reid undergo arthroplasty, or replacement of his shoulder joint and face a formidable cost, serious pain, months of rehabilitation, and thousands of dollars. And so, he set out on his medical crusade, seeking a Holy Grail of medical information that would both ameliorate his own pain and increase his knowledge and understanding of the options for medical care systems in the United States.

Before armchair critics (and politicians who think they know everything) toss around words like “socialized medicine” as negative, bitter pills, attributing it incorrectly to countries like Canada while blindly not seeing its existence in their own Department of Veterans Affairs, they should sit down and spend a few hours with The Healing of America. No no one is ever too old to learn, or for a surprise.