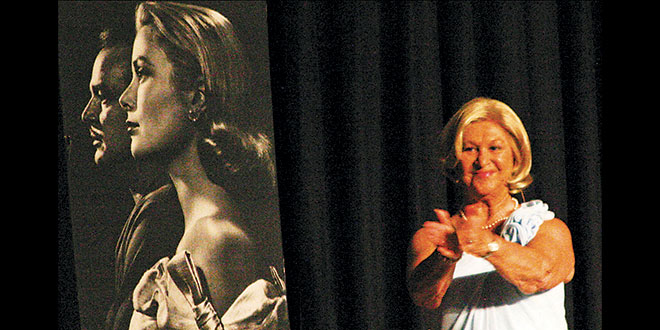 Bonnie Bozzo thanks the audience after her portrayal of Grace Kelly at the Rose History Auditorium. This was a sold-out performanceso get tickets early for her next show. photo by steve gimmestad

What better way to learn of history than through the mouths of those who lived it. A packed Rose History Auditorium got an earful when Bonnie Bozzo took the stage as Grace Kelly.

On Monday, Feb. 23rd, the Marco Island Historical Society presented another installment of the popular series presented by Bonnie Bozzo. On this occasion it was Grace Kelly that took center stage. Her glamorous, and complicated, life unraveled as those in attendance absorbed all she had to tell. And she did it with a unique and enjoyable style.

It would be impossible to cover all the details of such a life, but to summarize: Grace had a difficult family life. Loved acting, older married men, and had poor vision. She did not like being Princess of Monaco, treating it more like an acting job. She remained there for her children. Ask someone in attendance to fill in the rest. There were a lot of people in attendance, so they shouldn’t be hard to find.

“I don’t how she does 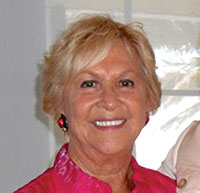 it,” said one attendee to another after the show. “That’s a lot, I mean a lot, of information to remember and I can’t even remember where I parked. It’s unreal.”

Bonnie Bozzo has portrayed other prominent women including, Ruth Bryan Owen, Evita and Margaret Thatcher, to name but a few. Her research is intense as she preps for the role. The life of Grace Kelly was very complex, and Ms. Bozzo does an impeccable job of conveying not only historical facts, but the emotions and relationships that evolved through Grace’s life.

Be prepared for her next event. When the doors opened for this one, there were only two tickets remaining. And they went very fast as you can imgaine. Best to call and reserve tickets well ahead of time.

To learn more about events such as “Meet Grace Kelly”, go to the Marco Island Historical Society website: themihs.com.