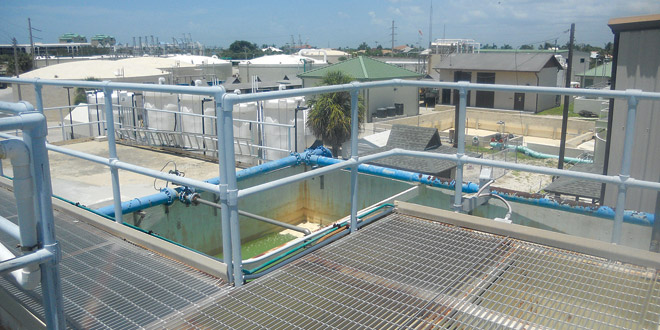 Marco Island Utilities officials may be singing “We’re in the Money” this fall.

If the city’s efforts to refinance its 2003 utility system revenue bonds are successful, the island’s water utility will free up $6.7 million in cash this September. The funds currently are held in an escrow account as insurance on the 2003 bonds. The refinancing also will cut the interest rate in half on the bonds — from an average of six percent to three percent.

“This is actual cash,” says Marco Island City Councilman Ken Honecker, who has served as a member and the chairman of the city’s Utility Advisory Board. “We will end up with a significant reduction in interest, and it will free up money for (capital improvement projects) that are unfunded. We could do them without raising rates.”

Projects like new water and sewer lines that have to accompany the Smokehouse Bay Bridge project – which has a price tag for the utility work of $600,000, and is not included in the current price estimates for the bridge – stand to benefit.

The move also may signal a small windfall for utility customers, says Honecker. “We have to figure out how to pass the savings onto citizens, maybe in the form of a one-time bonus check back.”

Still, the city must act fast. The bonds are callable in September, and the refinancing process takes about 90 days. As such, the city already put out requests for proposals for bond counsel, financial advisor, rate structure specialist and underwriter for the refinancing deal.

“We want to do this as quickly as possible,” Honecker notes. “At the April 15th meeting, we will have a list of qualified people and get them in place. Then, we should be able to make everything happen by July.”

Too much, too fast

The city bought its water utility in November 2003 from Florida Water Services in a very contentious and quick deal. The acquisition was made possible by $103 million of water and sewer revenue bonds, with $85.3 million to purchase Florida Water’s assets and some $11 million for upgrades and renovation. The rest paid for a surety bond and the costs of issuance.

In all, eight local governments in Florida issued more than $427 million of tax-exempt water and sewer bonds to purchase about two-thirds of Florida Water’s system, which at the time was the state’s largest privately-owned utility. Among the other buyers were the cities of Palm Coast and Deltona, as well as the Tohopekaliga Water Authority which purchased its system on behalf of the city 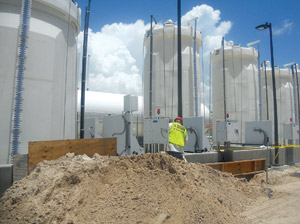 The city has updated many of the wastewater and water treatment plants.

of Kissimmee and Osceola County.

According to Honecker, the deal was flawed in two major ways. First, the city had just two weeks to conduct due diligence on a system Florida Water was not investing in anymore. “They were not putting a lot of money into maintaining the system,” he explains. “Florida Water’s idea was to throw a band-aid on it and some bailing wire.”

The second problem was that city officials vowed to keep utility rates the same for its first five years of ownership, pledging to limit any rate adjustments to the inflation index.

The error of this promise became evident once the city took control of the utility. “Once we opened up hood, it was worse than we thought,” Honecker says.

Jeff Poteet, general manager of Marco Island Utilities, agrees. “Both the waste water and water sides needed considerable improvements,” says Poteet, who has been with the utility for more than 20 years. “The buildings and infrastructure all needed to be changed and were in disrepair.”

These problems led the city to issue close to $200 million in additional utility revenue bonds to cover countless capital improvement projects, along with the Septic Tank Replacement Program (STRP). The total damage in bond debt for the utility: $290 million.

“The issuer is highly leveraged,” explains Teri Wenck, an associate director and primary analyst of public infrastructure financing for Fitch Ratings. “This means they have quite a bit of debt. When you do an acquisition like this, you have a lot of upfront investment for the purchase price.”

Even so, Wenck and other industry insiders, believe this type of infrastructure investment and bond debt is not bad for a city. The reason: Stability.

According to Fitch Ratings, “the outlook for the U.S. water and sewer sector is stable despite ongoing economic, capital and political pressures. The essential services provided by the sector, monopolistic business nature and local rate setting are key factors in the sector’s performance stability… (M)ost systems continue to exhibit sufficient financial flexibility.”

“So,” says Wenck, “it is not uncommon with what (Marco Island) did.”

Honecker concedes that the utility deal was not done “how we would normally do it.” He also notes the city could have planned better when it came to the utility’s capital needs and implementing the STRP.

Still, he says, “it was the right decision to buy the 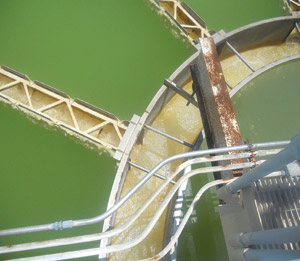 To be sure, Marco Island has fared better than Palm Coast, which bought its utility from Florida Water too in 2003. Palm Coast’s bonds were downgraded by Fitch Ratings in 2011, while Marco Island’s were upgraded just last year. Palm Coast was hit much harder by the recent recession than Marco Island, which has effected Palm Coast’s ability to raise rates and keep cash in the bank. At one point in 2010, Palm Coast’s unemployment rate topped out at 15.4 percent.

Plus, the city has gotten a lot of bang for its bonding buck, spending the last decade completely overhauling the potable water and waste water treatment facilities.  According to Poteet, the utility is comprised of five plants: a raw water facility located close to the intersection of State Road 951 and US Route 41; a plant servicing Mainsail Drive and Marco Shores; a brand new waste water treatment plant on the island; and two drinking water plants on the island.

“Our water quality coming out of the membrane is far superior,” he notes.

Moreover, the utility’s capital needs are projected to level-out as the STRP winds down and the utility approaches build out. The capital improvement plan for fiscal 2012-2016 totaled $34 million, which was down from the 2010-2014 plan of more than $92 million. The city plans to use cash to fund close to 40 percent of this work.

Cash like the $6.7 million Marco Island Utilities will receive from the bond refinancing, and if Honecker has his way, cash from the sale of surplus land held by the utility near Mainsail Drive which could help pay for current capital needs.  The covenants of the bond deal prohibited the city from selling this land previously. Honecker hopes the refinancing will change that.

“Our problem is that we have a lot of debt, and we have to get the debt number down,” he says. “The next step, I’d love to sell this land. It would help take down the debt.”