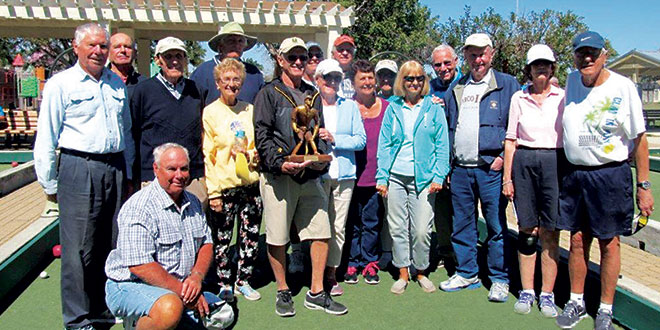 The Italian American Society and the City of Marco Island Parks and Recreation Department hosted 16 bocce teams for the Bob Ray Memorial Bocce Ball Tournament. Over 160 attendees were counted, at which point it was deemed a success and counting ceased! All who came enjoyed a gorgeous day, cheered for their favorite teams and took advantage of the opportunity to do a bit of socializing.

the trophy that is awarded to the winning team. The award is in honor of an IAS member, the late Bob Ray.

In addition to this trophy, the winning team’s name is placed on a plaque, which is on display at Mackle Park all year long.

Lola Dial, recently named the interim recreation manager for the City of Marco Island Parks and Recreation Department said, “I was thrilled to be a part of it.” The tournament was organized by Phil Medonia and Peter Pareene.