Birds Among the Mangroves 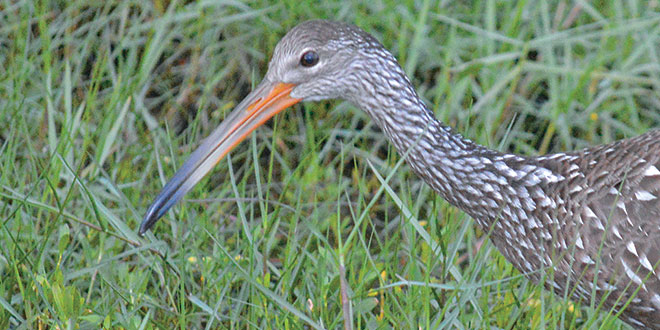 A year-round Florida resident, this Limpkin was recently seen feeding along Collier Boulevard.

Look! Up in the sky! It’s a bird, it’s a plane! It’s a visitor from another planet! Wait a minute…it’s a bird. As some of our winter, feathered friends have left the Marco Island area, others are arriving to join our year-round residents.

The white pelicans that were seen in the Tigertail Lagoon and Marsh Trail are back up north. Boasting the second largest wingspan of any North American bird, these graceful flyers have returned to their northernmost states and Canada for their summer breeding season.

The peregrine falcon, which stops in the Marco area on occasion before using the Florida Keys as a launching pad for its southern migration, have also made the return journey to their nesting areas as far away as the artic regions. The fastest animal on the planet, these stalkers will dive on their prey at speeds approaching 200 mph before delivering a lethal blow. At least two of the falcons, however, called our area home for the winter and were seen quite often in one particular spot along the intercoastal waterway. They, too, seem to have moved on.

So which ones are arriving? Why would they even consider this section of the state for the spring and summer months? As the warm, humid conditions dominate the next several months a source of food returns as well…bugs! As more solar energy is provided in the northern hemisphere at this time of year, the southern hemisphere becomes cooler. This is a signal for one particular species to head this way for its summer food supply and for nesting. Beginning in January or February and departing from as far away as southern Brazil the swallow tailed kite is already in

A peregrine falcon perches on a branch among the mangrove trees. Photos by Bob McConville

Crossing the Andes Mountains, favorable trade winds will propel these graceful flyers over South America, then Central America, until the treacherous journey from the Yucatan Peninsula to the southern states begins. Because their wings cannot maintain a continual flapping motion they are unable to make their way against headwinds and will circle gracefully over the water waiting for a change in wind direction. Many of these kites perish during this migration because they cannot remain aloft for more than four days. If the northerly winds persist when the kites need a southerly flow, they will not successfully make the journey across the Gulf of Mexico and Florida Straits.

Several are already here and can be seen around the mangrove areas and also nesting in Naples at Sugden Park. Their darting motion while in flight is their tactic for gathering food. They feed “on the wing,” or in flight. They will catch flying insects in the air and also swoop low over trees and bushes, picking their prey from leaves and twigs, without a pause in their graceful motion. Climate conditions will remain favorable for their presence until early fall when they again return to South America with their young.

One of the more curious looking birds near Marco is the limpkin. Non-migratory, Florida is its northernmost territory. It will range southward through portions of Central America and the primary concentration is in northern Argentina. This bird prefers wooded areas, fresh water swamps and marshes. Resembling an ibis in looks it is more so related to the crane.

It feeds primarily on freshwater snails, mussels, insects and frogs. Its scissor-like beak is ideal for removing the meat from its favorite food, the apple snail. Unfortunately, with

White pelicans feed along the Marsh Trail. They have returned to their northern homes for breeding.

more than half of Florida’s wetlands conversion for flood control, development and agriculture, the apple snail habitat has been tremendously reduced. Future plans for wetland restoration may offer hope for the revitalization of the limpkin’s food source.

They get their name from their flight movement. With the legs dangling and the awkward, jerking fly pattern it appears as though they are limping through the air.

There are so many more birds around Marco Island to learn about. It would take a book to give recognition to them all. To discover more facts about some of these wondrous creatures please join me on May 12th at the Rose Auditorium. Questions such as what is the difference between an egret and a heron will be answered as well as a look at some of the other unique birds, including some of our raptors. Until then…look! Up in the sky! Is it a bird or a plane?

Bob is the owner of Stepping Stone Ecotours and a naturalist on board the dolphin survey boat Dolphin Explorer. Bob loves his wife very much!

Join Bob on May 12, 7 PM, at the Rose History Auditorium for a look at some of our area birds. Which ones have left Florida and which are arriving? Which ones stay all year? This will be a fun, pictorial look and talk about our aviary friends. MIHS members and MIA students are free. A $5 donation is requested by all others.