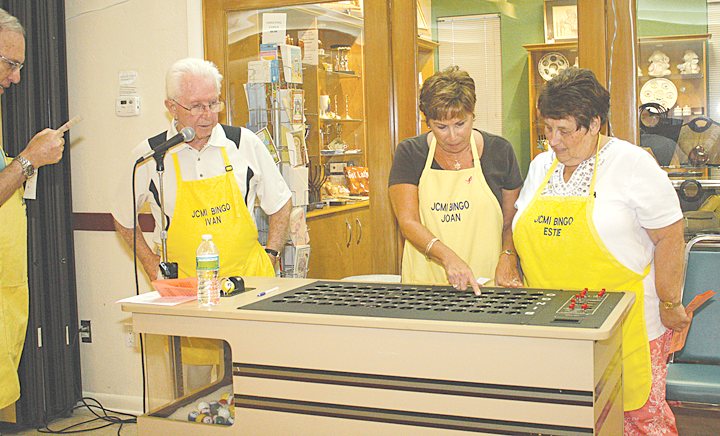 The Bingo Game at the Jewish Congregation of Marco Island has reached a milestone–the 12th season opened Monday, October 4th.  Bingo is played every Monday evening through to Monday, May 2, 2011, at the Synagogue located at 991 Winterberry Drive.  The game is open to the public.

Several of the players during the evening commented that they had been present, January 3rd, 2000, when the game opened its doors.

The same members of the Bingo Committee, some 28 persons, with their bright yellow aprons, have returned to work.  With the Co-Chairpersons Sue and Dr. Harold Baum, the Committee members prepare the packets, set up the food and drinks, call the numbers and award the prize money.  Some pots of money from HotBall, an extra prize, were not won last season and are carried over for this year.

The Committee will continue the policy of serving supper each Monday evening, without charge. The Committee started several years ago to serve a free kosher hot dog supper, the 1st Monday of the month.  Sue Baum stated that the furnishing of the supper was so popular that the Bingo Committee decided to exand the service of supper to each Monday evening.  The menu is as follows:  1st and 3rd Mondays, free kosher hot dog, sauerkraut, relish, pickles and chips.  2nd and 4th Mondays, Bingo Sandwhich which is kosher salami on deli-rye bread or chicken salad on deli-rye bread. Also served, without charge each Monday evening, is pastry, fruit, coffee and tea.

The Baums commented that the dedication of the workers prompted the reward to each worker of the yellow apron with the Bingo logo and their names. Most of the Committee Members have served from the beginning of the game.

Bingo Gift Certificates are also available, the perfect gift for any occasion.