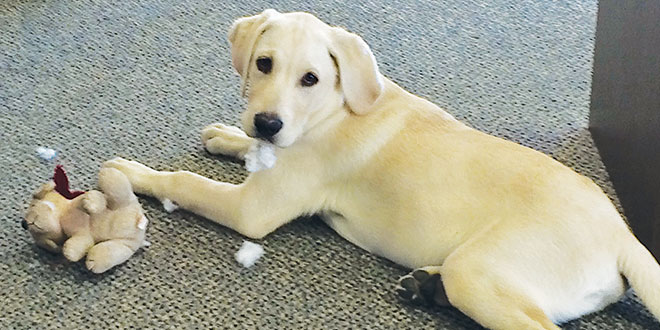 They say babies are beautiful so your mind forgets the negative aspects of having them. That is true not only in the human world, but with animals as well! Breezy is the perfect example, he was the cutest puppy in the world, so when he did something bad, he would look up at you and melt your heart. Who could be upset with that cuteness?

Breezy has been growing by leaps and bounds. A neighbor exclaimed, “My gosh, he grows a foot every day!” Hard to imagine, but the little puppy quickly grew bigger. And bigger. AND BIGGER! He went from the cutest little thing to this odd dog-like creature with a puppy brain, not yet grown into his big head. He is so awkward with his new long legs and long body that he doesn’t quite know what to do with all the extra length. Once he was sitting with a leash behind him. As I pulled the leash towards me, Breezy followed it with his eyes until he completely tumbled over backwards!

As a young pup, he would piddle everywhere and tasted everything in his path. It is hard to keep your eye on a puppy 24/7, so we found an extra-large baby gate to spread across the wide opening between our den and living room. Now this is truly funny because certain family members (my husband) have come to the conclusion that Breezy is not too bright. Up goes the gate, Breezy walks over, takes one 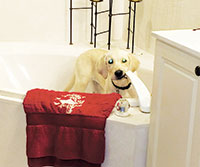 sniff, and his oversized paws slide into each slot and he is up and over in 10 seconds flat! Not too bright? Really?!

Breezy is definitely bigger! Breezy is definitely better! He knows his name, has SOME control over his bodily functions now, and he can sit and stay, if he so chooses. He learned immediately that if he goes outside and does his business, he will get a treat when he comes in. He goes right to the box, sits down and waits. Yes, he is growing physically and mentally.

Obviously, there are many tips and techniques that make training easier and with Breezy in the office some days, he needs proper training. No jumping on people and getting overly excited when someone comes in the door. Puppies run full steam ahead and having a dog run straight for you preparing to leap into your arms can be frightening to a senior citizen or a young child. Let’s not talk about the dangers of the street or the ‘vacuum’ devouring everything he can get in his mouth. We have had two unpleasant experiences with Breezy eating whatever he can whenever he can. Three uncooked sausages off the counter meant looking up what to do on the internet. Nothing was the answer to that one. However, Breezy loves tight spaces. He crammed himself next to the couch chewing on something he hoped I wouldn’t see. Upon closer inspection, there was a half-eaten ibuprofen capsule he was playing with. A quick internet 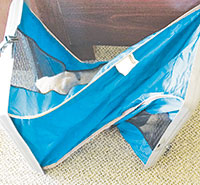 check indicated this is potentially a VERY serious problem. An after-hours call to the vet indicated he needed to purge his stomach contents. We were instructed to give him one teaspoon of hydrogen peroxide and wait. If he wasn’t throwing up the contents of his stomach by then, another dose was indicated. Fortunately, another dose was not needed. Who would have thought hydrogen peroxide? Don’t confuse it with the rubbing alcohol in your medicine chest! It saved us a lot of worry, and cash, running to the all night emergency clinic! For your peace of mind, and for the health and well-being of your dog, proper training is required.

Finding the right puppy class is almost as daunting as finding a puppy! There are several in the area, from the ‘free’ introductory puppy classes held at big box stores like Petsmart, to live-in boarding camps and celebrity-endorsed training. Training is held at parks, stores, privately owned facilities and gyms with obstacle courses. Classes run the gamut as well, from puppy classes to service dog training, to socialization or fitness classes, tricks and more. It’s enough to make your head spin! And if the selection doesn’t make your head spin, the prices will! And you thought you’d have to save for your child’s college education!

We chose an AKC certified training program near the airport. I was impressed they had their own facility set up specifically for training. After our first class, we found this training center’s primary function is training service 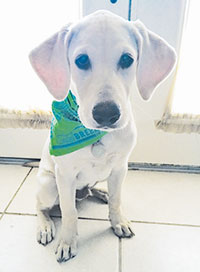 dogs. They have 12 in the process, but they don’t interfere with the classes or the puppies. In fact it is quite amazing to see several dogs in crates not crying, not barking, just watching every move the visiting dogs make. I don’t know how they do that because when we crate Breezy it sounds as if the ‘hounds of hell’ are coming out of that crate. He clearly doesn’t like it! He has two crates, a metal one at home and a travel one with fabric sides at the office. He experiences a bit of separation anxiety when put in the crate (unless it is bedtime) and you can easily find the travel crate on the opposite side of the room from where it started, all caved in with Breezy’s little face looking out.

Even the metal crate can’t contain him. He had been crated for less than an hour one evening when my husband came home and found Breezy scratching at the door. He had to forcefully push the door as Breezy had chewed up several inches off the edge of the carpeting and about a foot of the padding underneath. BAD BREEZY!!! BAD, BAD, BAD! He has learned to pull the metal panel from the front of the crate inward so he can get out. (And my husband doesn’t think he is smart!) Thankfully, zip ties at the corners have fixed it so the escape artist is contained.

We brought this up to the trainer. First, we were told he should like the crate. Feeding him 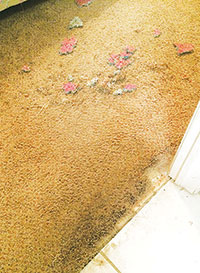 in the crate and making sure he has toys in the crate will help. The trainer’s philosophy is CONFINE, CONTAIN, CONTENT. They suggest a 20/20/20 rule. Twenty minutes in the crate, twenty minutes training and twenty minutes play. They specifically recommend Breezy not be over stimulated. He does get that wild look in his eye on occasion and goes TEARING around the house like some crazy thing is chasing him (even when I am not!)

There is something about taking your puppy to a class for a few weeks and comparing everyone’s progress that can leave you discouraged. One dog, a German Shepherd, is so well-behaved I have to wonder what they’re even doing in the class! There is another couple who are strictly interested in teaching their dog what is required to ‘show’ properly and another couple that appears to have worked with their dog every waking minute of every day. Then, there is Breezy! Last week, there was a new puppy that came to class which hadn’t been to ANY previous classes. FINALLY! Another dog so ill-mannered he actually made Breezy look well-trained for a second.

On a serious note, one pup in the first session was quite angry, snarling at other dogs and its owner. Normally he was a little loving bundle of fluff but at certain times, it sounded vicious. The trainer said this can happen when a pup is taken from its mother too soon. Six weeks is too early and many breeders, by six weeks, 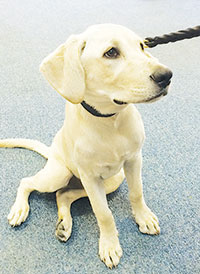 are ready for the little ones to get out the door! If looking for a puppy, make sure the breeder doesn’t wean the pups too soon, eight weeks plus is best, they also need to be handled daily thereby socializing them. It will make a huge difference in the demeanor of the dog as it gets older.

As puppy gets older habits begin to form. (Like sitting at the edge of the counter waiting for a treat.) Unfortunately, bad habits set in, too. Breezy started what is called ‘air snapping’. He gets excited and frustrated and since everything in the world to him is ‘mouth oriented’ he takes out his frustration by snapping. He knows not to bite, but he just can’t help himself. We are delving into this behavior more deeply because it isn’t acceptable. He is the ONLY dog I have ever seen that can actually ‘talk back’ when you’re admonishing him. He starts with a little yappy bark along with the air snapping. He talks back more than teenage kids do!

Breezy is vocal, barking at things outside, barking at people on motorcycles, bicycles and walking while we are driving. He was playing with a squeaky toy, tossing it in the air and biting it to make it squeak. Then, out of nowhere came this sound…it was unlike anything I had ever heard. Breezy was howling at his toy, but it was so much more than that. I finally got a few seconds of it on film. My daughter swears it sounds it sounds like caribou!