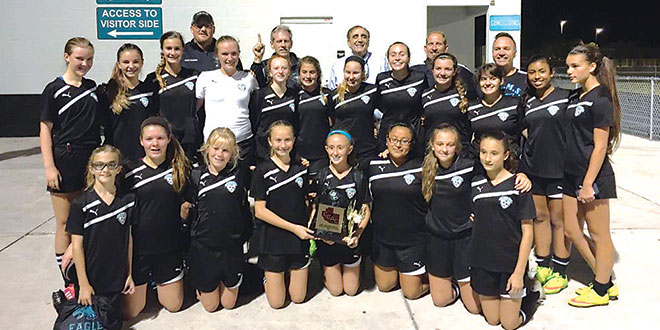 The Lady Eagles only loss was in the Collier County Athletic Conference championship semifinals to Pine Ridge Middle School, 1-0.

And that goal came after a scoreless regulation and a 10th shot in a shootout.

They had every right to feel more than good about their accomplishments.

Yet this season the theme was “Unfinished Business,” said Coach Patrick Baldwin.

The 11 seventh graders, now eighth graders, eight of them starters, were about to make amends for that loss which cost them the Collier County Athletic Conference title.

They could have used the reasoning that every public school had a much larger enrollment. They didn’t.

They ran through 18 opponents this season, going undefeated 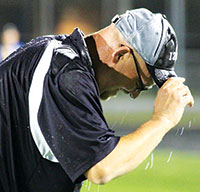 The only opponent left to break their win streak, again, was Pine Ridge. This time in the championship game of the Collier County Athletic Conference.

The two teams battled fiercely, leaving the field after the first half, at 0-0.

The Eagles’ Savannah Heimerl scored on a penalty kick with 10 minutes left.

Pine Ridge came back with a rebound shot and score five minutes later.

The Eagles Kristen Petronzio served up a corner kick that was knocked away, only to have Petronzio make good on a rebound shot from 20 yards out with three minutes left.

It sealed the win and championship. The Lady Eagles became the first sports team in Marco Island Charter Middle School history to win both championships in the same season.

Kristen Petronzio moves in to control the soccer ball, as Vanessa Alvarez (23) is ready to give support. PHOTO BY PATTY POLING

more than did her part, stopping 15 shots on goal. It showed the challenge Pine Ridge posed. In the previous 17 games Sann stopped just five shots, thanks to a staunch defense.

Over the past two seasons Victoria Alvarez, Brielle Penzo, Lauren Faremouth, Jenna Palumbo and McKinley Champeau made life miserable for the opposition, while also having a major impact on the Lady Eagles’ offense.

“That (Pine Ridge) goal was the first the defense had allowed all season,” Baldwin said. “They were upset, but their heart and toughness just shined through. They bared down and didn’t allow another shot on goal. They only allowed 10 other shots on goal the last two seasons.”

It also helps when your offense is constantly challenging the opposition. The Lady Eagles singed the nets for 96 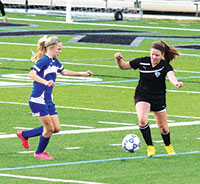 Petronzio slammed home 37 goals, adding 14 assists for 51 points. The year before she scored 21 times. Heimerl was next with7 goals and 14 assists for 21 points. Faremuth and Penzo chipped in with 19 points each, Champeau 16 points and Nicole Rodriguez, 15 points and Daelynn Aguilar, with 12.

Baldwin takes pride in the entire team that had just one club player, Heimerl.  Pine Ridge had seven.

“They are home-grown talent, playing in the Marco Optimist Club soccer program. I have coached the girls for three years in Optimist soccer. These girls never gave up.”