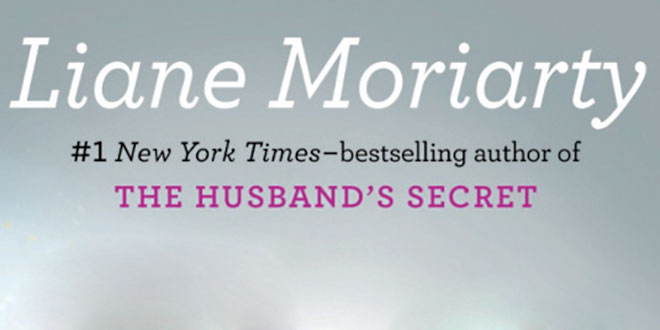 “Perhaps it is only human nature to inflict suffering on anything that will endure suffering, whether by reason of its genuine humility, or indifference, or sheer helplessness.” — Honore de Balzac, Pere Goriot

“Big Little Lies” tackles some very serious issues but serves them up with a mega dose of humor. Moriarty’s characters are so artfully written that the reader can instantly visualize these people. By page 5, I was hoping that someone would make a movie out of this book. Turns out, they are. Actually, it is going to be a TV miniseries with Nicole Kidman and Reese Witherspoon, who each bought production rights last summer. The third major female role has not been cast yet, or at least I could not find information on it. But, I digress, on to the matter at hand, the book.

We first meet Madeline Martha Mackenzie celebrating her 40th birthday and driving her five-year-old daughter, Chloe, to Kindergarten Orientation Day. After getting out of her vehicle at a stop light to correct the texting habit of the teenaged driver ahead of her, Madeline turns her ankle and writhes in pain on the ground. Although running late herself, the driver of the car behind her stops to ensure that all is well. Thus enters Jane Chapman, a 24-year-old single mom, taking her son Ziggy to the same Kindergarten Orientation.

After dropping the children off at orientation, the ladies go to Blue Blues café where Madeline is to meet up with her friend, Celeste White, for a little morning birthday celebration until it’s time to retrieve the kids. Madeline invites Jane in gratitude for her help but also because Madeline was a single mom herself for several years after her ex-husband deserted her and their three-month-old daughter Abigail. She feels a certain kinship with this young woman who is new to town as well as to the school.

Celeste White is a drop-dead gorgeous woman in her mid-30s, mother of very boisterous five-year-old twin sons and wife of very wealthy, very busy, very charming Perry White. She and Jane become friendly immediately and even start taking walks together most mornings. Most of the time, they say very little to each other, but relish the comfort of the other’s company while each is lost in her own thoughts. Because she works part-time, Madeline does not join them on the walks even after her ankle heals. There is not a lot of silence when Madeline is around.

The threads of friendship that bring these three women together are integral to the story. As the book progresses, these threads are incrementally tightened, like strings on a guitar, until we see just how in tune these women’s lives truly are and we know what big little lie each has been telling herself and the world.

Back to the kids. When the ladies return to Pirriwee Public School to pick up their Kindy kids, there is trouble brewing, and school does not even start for another two weeks. One of the gifted children, Amabella (not Annabella), has been bullied and physically assaulted. Amabella’s mother Renata is a force to be reckoned with. She and her husband generously donate to the school, even provided air conditioning for the entire building, and Renata expects “consideration.” Amabella points out Jane’s quiet little son Ziggy as her tormenter. Renata is justly enraged that someone has hurt her child, but Jane is equally adamant that her son is not a bully. Madeline sides with new friend Jane because it is in her nature to be opposed to Renata and because she just believes Jane.

School Trivia Night is six months into the school year, where the parents and faculty meet for socializing, cocktails and trivia games. This year, the funds raised are 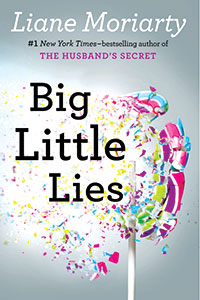 for SMART boards. The women are costumed as Audrey Hepburn, and the men as Elvis Presley. Mrs. Ponder, the retired nurse who lives across the playground, notes to her cat Marie Antoinette that the women all look beautiful and the men just plain ridiculous. It is Saturday night. The caterer and the MC have both been stuck in a huge traffic jam. There is no food, no entertainment, only lots of alcohol on hand. Hearing loud noises and a stream of profanities, Mrs. Ponder and Marie Antoinette witness an Elvis hit another Elvis in the jaw, then stumble along. Police sirens are coming closer. A parent is found dead.

In addition to the mystery of which parent is dead, we have the mystery of which child is the bully, and how the three main female characters will reconcile their big little lies. Well, it is quite a trip that Moriarty provides for the reader. School Trivia Night is anything but trivial. All the strings are now tightened on the guitar, and it is humming away with every step each character takes and every word they speak, reaching the crescendo that disturbs Mrs. Ponder and Marie Antoinette.

The author does not unravel the story chronologically but begins with Mrs. Ponder’s perspective on School Trivia Night. The reader knows the police were called, but not that a parent is dead until a bit later. At the end of the chapters, there is a transcript of various school parents and faculty giving statements to a newspaper reporter about Trivia Night. This provides not only amplification of Trivia Night events but also luscious gossip about the goings on in this beautiful little Australian costal town. A sampling of the parents’ statements reveals the humor infused throughout the book:

Gabrielle: “It wasn’t like it was just the mothers, you know. It wouldn’t have happened without the dads. I guess it started with the mothers. We were the main players, so to speak. The mums. I can’t stand the word ‘mum.’ It s a frumpy word. ‘Mom’ is better. With an ‘o,’ it sounds skinnier. We should change to the American spelling. I have body-image issues, by the way. Who doesn’t, right?

Melissa: “You know what I think got everyone all hot and bothered? The head lice. Oh my gosh, don’t let me get started on the head lice.”

Samantha: “The head lice? What did that have to do with anything? Who told you that? I bet it was Melissa, right? That poor girl suffered post-traumatic stress disorder after her kids kept getting reinfected. Sorry. It’s not funny. It’s not funny at all.”

Detective Sergeant Adrian Quinlan: “Let me be clear: This is not a circus. This is a murder investigation.”

“Big Little Lies” is 460 pages of entertainment. It is hard to put down. You know these people. You will recognize yourself, your mother, your cousin, your boss, your brother, etc. in this book. You will feel the heat in the gym on Trivia Night and the lightheadedness of alcohol on an empty stomach. You will want to hunt down and collar the Kindy bully who is tormenting the shiest girls in class. Give yourself permission to laugh at the humor because further down the page, Moriarty will grip your heart with a passage describing terrifying domestic violence.

This book is a great read. I hope the miniseries does it justice. Rating: 4.75/5.0. A nod to Mr. Lincoln on the anniversary of his birthday. Happy Valentine’s Day to all!